Last august, Jelmer, Guus, Loek and me went to the Chamonix Aiguilles for some premium quality granite climbing. First at the south side of the Aiguilles (in the ‘Envers des Aiguilles’ area) and later we approached these ‘aiguilles’ (french for ‘pinnacles’) from the north side. The weather during the week was a bit changeable, so we had to adjust our plans sometimes. Nonetheless we had a very good time! 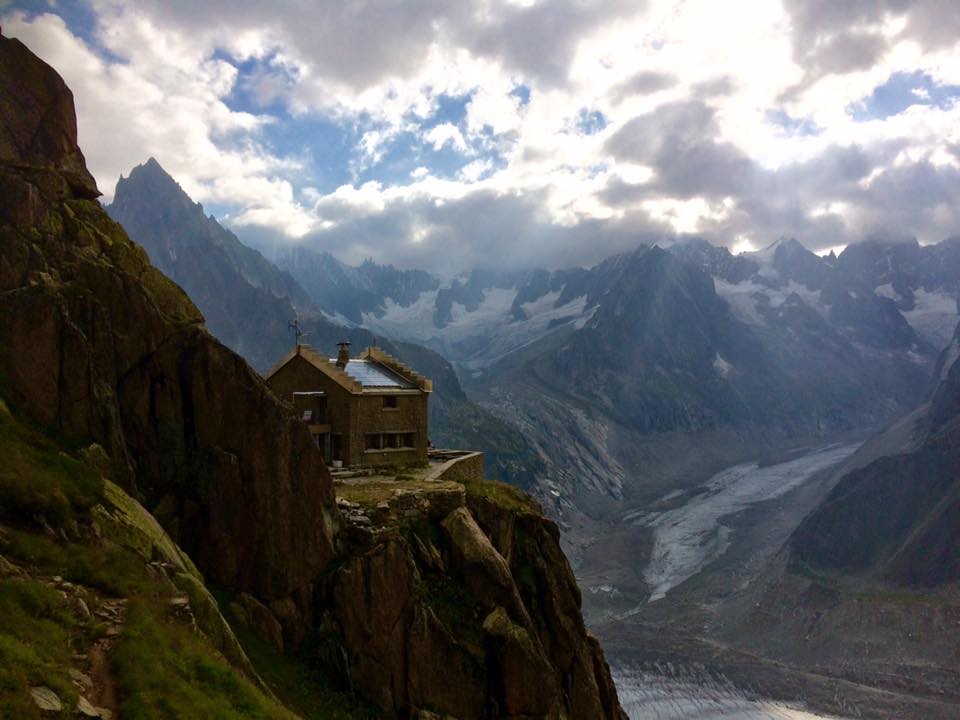 The cosy refuge Envers des Aiguilles attracts motivated rock climbers who like trad climbing. It offers short approaches to world-class alpine rock walls, treats you with one of the best views in the Mont Blanc massif and has really friendly staff. I have been coming back here each year at least once for 5 years now. Mainly in June/July, so it was the first time seeing the small glaciers here so ‘dry’. Not only because it’s the end of the summer, but also because of the relatively high temperatures during the last season. Makes me a bit sad, hoping for a bitter cold winter with lots of snow! 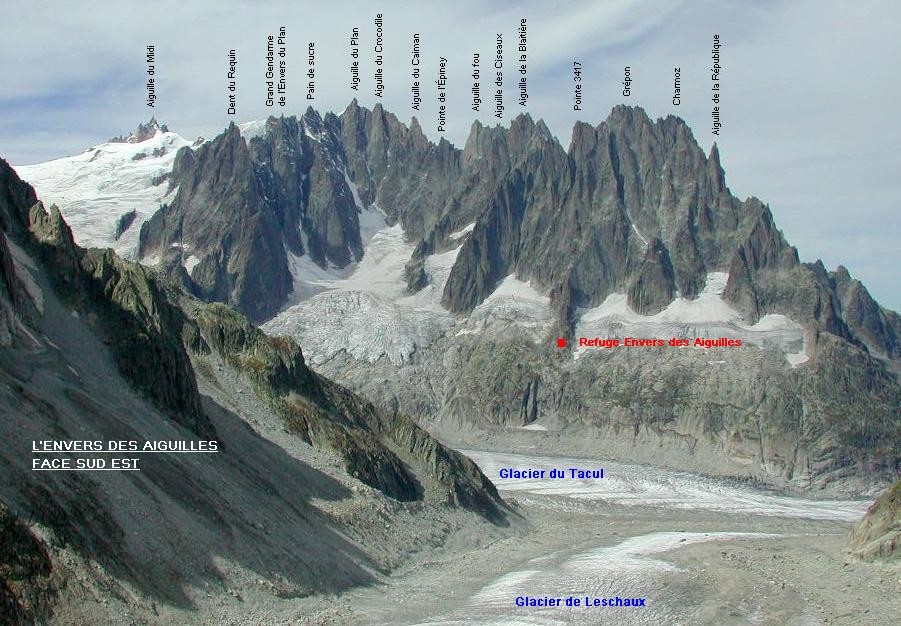 Jelmer and me start with Amazonia, at Première pointe des Nantillons (6b, 400m). It’s a route of appr. 13 pitches and we have an enjoyable time climbing this piece of granite. That afternoon, when we come back to the hut, Guus & Loek, the climbing doc’s, have arrived and are doing a short route just behind the hut. We enjoy a beer while watching them. Half an hour before dinner is served, they return and we drink another beer together in the cool evening air in front of the hut.  That evening, next to us at the dinner table sits a famous man here in Chamonix, Michel Piola, who is re-equiping one of his routes and opening a new one. Curiously I ask him lots of questions about routes, equiping, and his favourite routes and walls here, which he kindly answers 😉 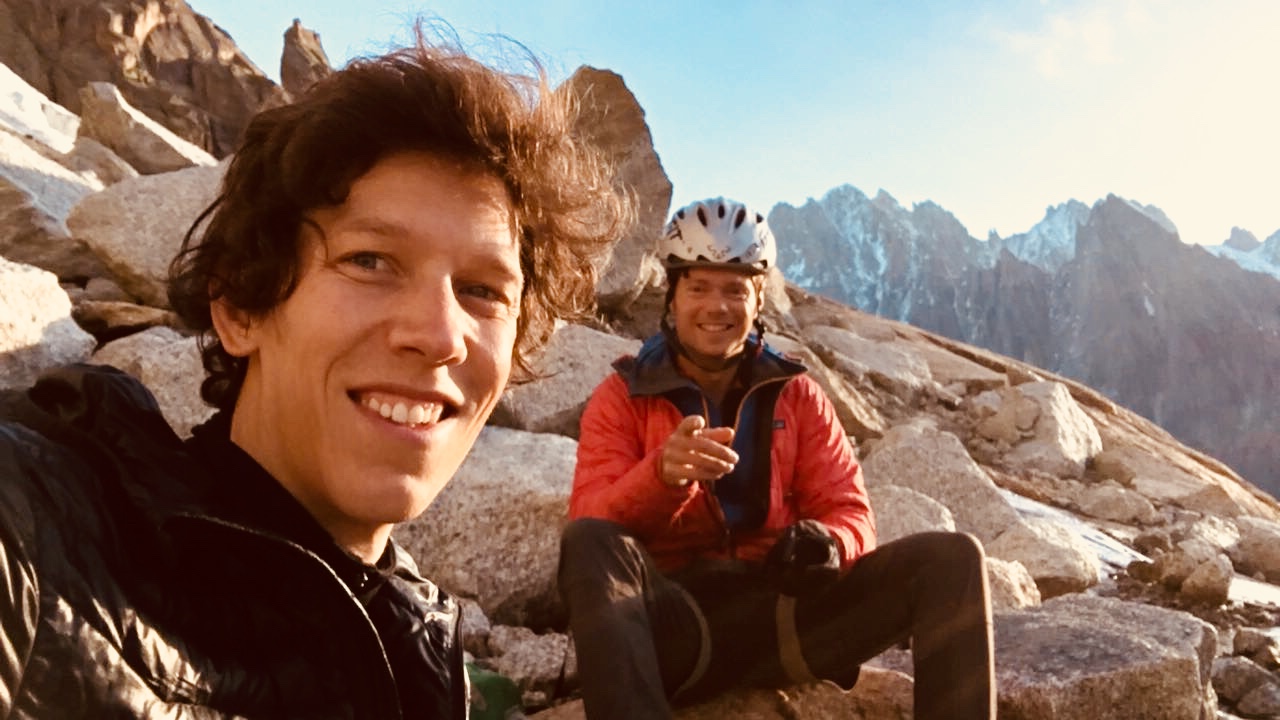 About to start climbing Amazonia 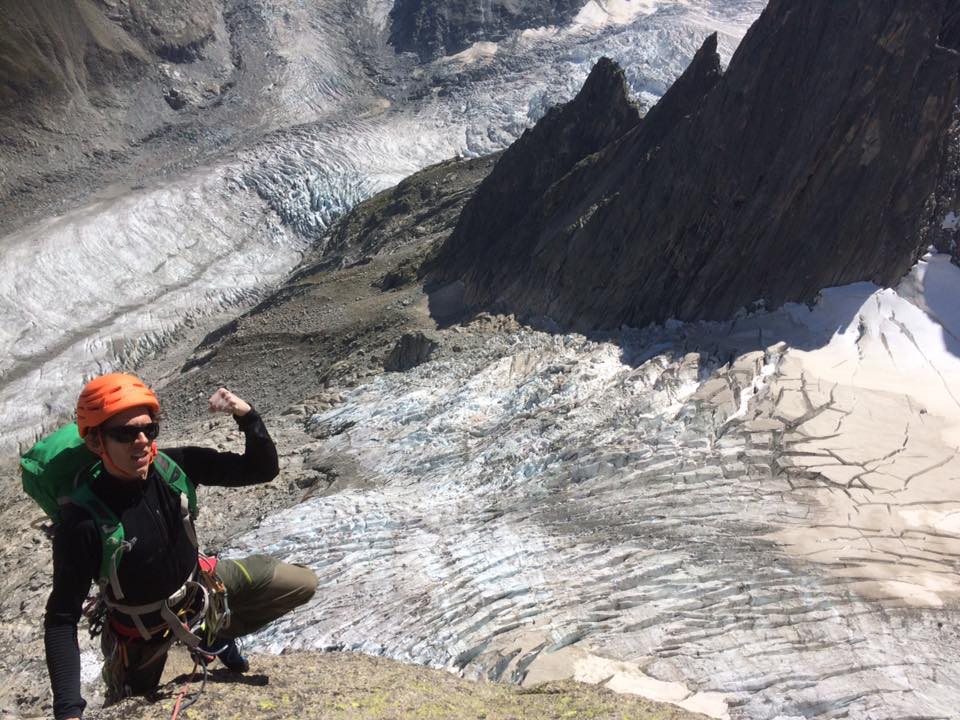 Jelmer on the last pitch of Amazonia 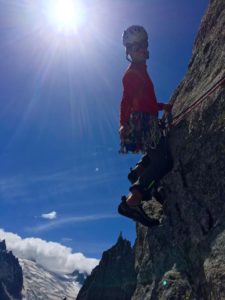 Somewhere during our climb that day 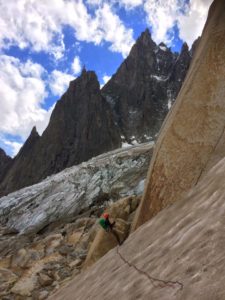 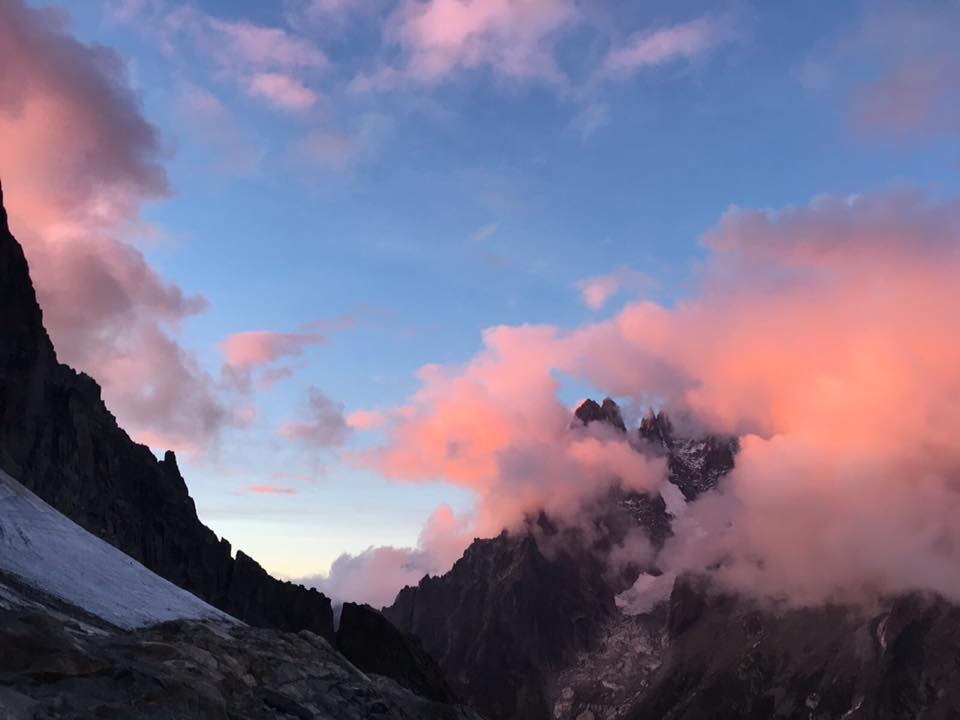 Next day we want to go BIG. Jelmer and me go for Ambiance Eigerwand with the Children of the Moon integrale finish’ (6b, 740m) and Guus & Loek go for Pedro Polar (6b, 350m – extension possible).

I remember Jelmer and me walking up the steepening slope of the small Telaporte glacier in the morning, hoping our approach shoes and light crampons will do their job well.. While slowly overcoming a few small crevasses, I don’t feel too comfortable frontpointing my ultralight crampons and light shoes, but I decide (as always) to just hope for the best, have trust in my careful movements and axe. It works, of course!

We are not so sure where exactly our way up this enormous rock wall starts if the bergschrund (gap between the glacier and rock wall) will allow us. In the hut we heard they’re causing problems for entering many of the routes, also in combination with the low snow levels this year.  Many routes start 3-5 meters lower than earlier seasons; for example in the popular route ‘Marchand du Sable’ an additional rope was connected to the first belay in order to get there from the glacier  [for a report of this route click here]. 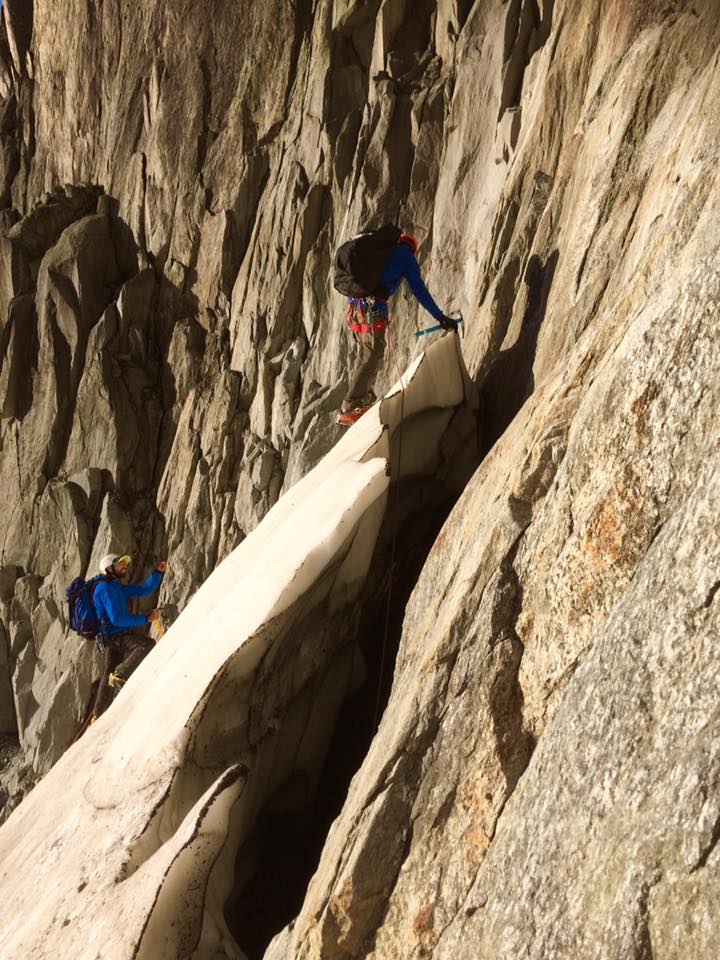 Fortunately the schrund we face is not so big, but just big enough not to let us pass and the rock wall on the opposite side is blanc, without any holds or cracks. I have to traverse right, remove my crampons -in an akward position (every climber will recognize this 🙂 ) and carefully climb towards the belay. The belay is nothing more than a bunch of old ropes and bad schlinges squeezed into a little crack behind a boulder. Jelmer climbs up as well and hanging in the belay together we prepare ropes and gear for the vertical wall above us. 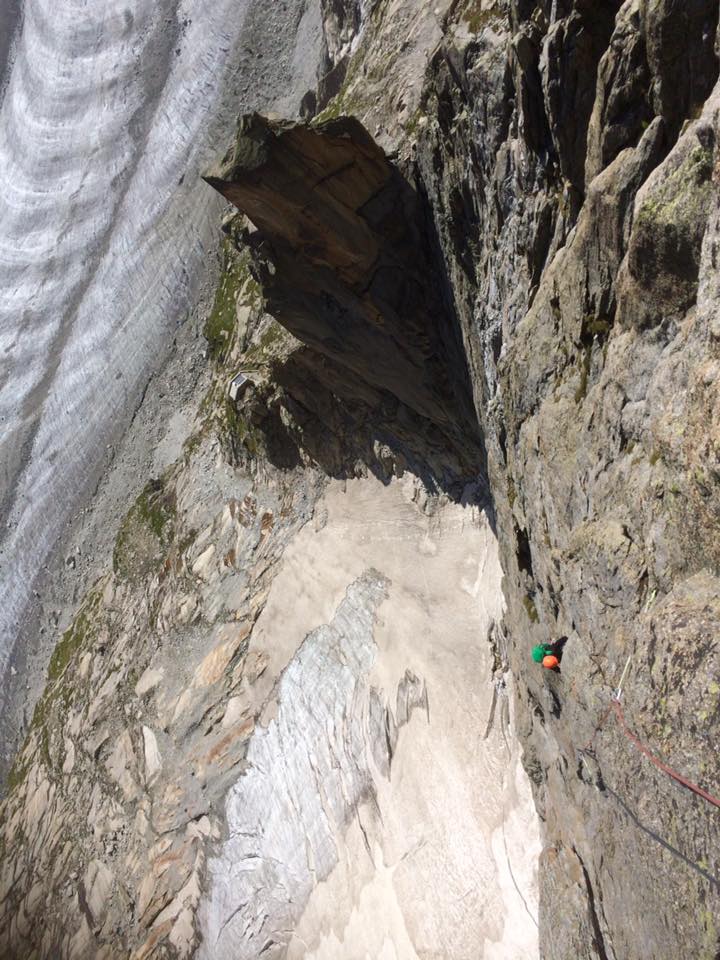 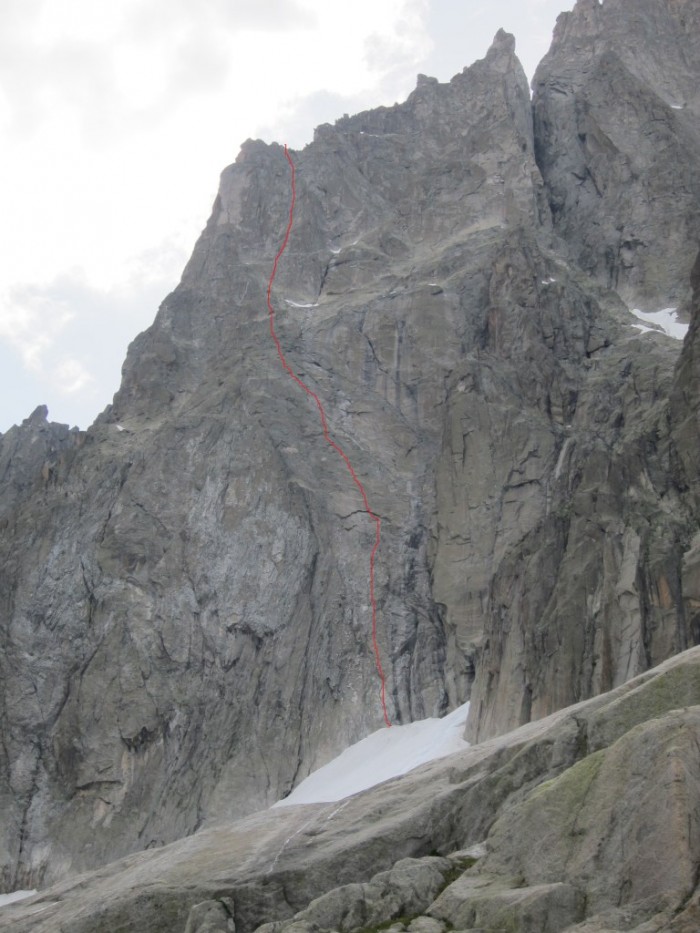 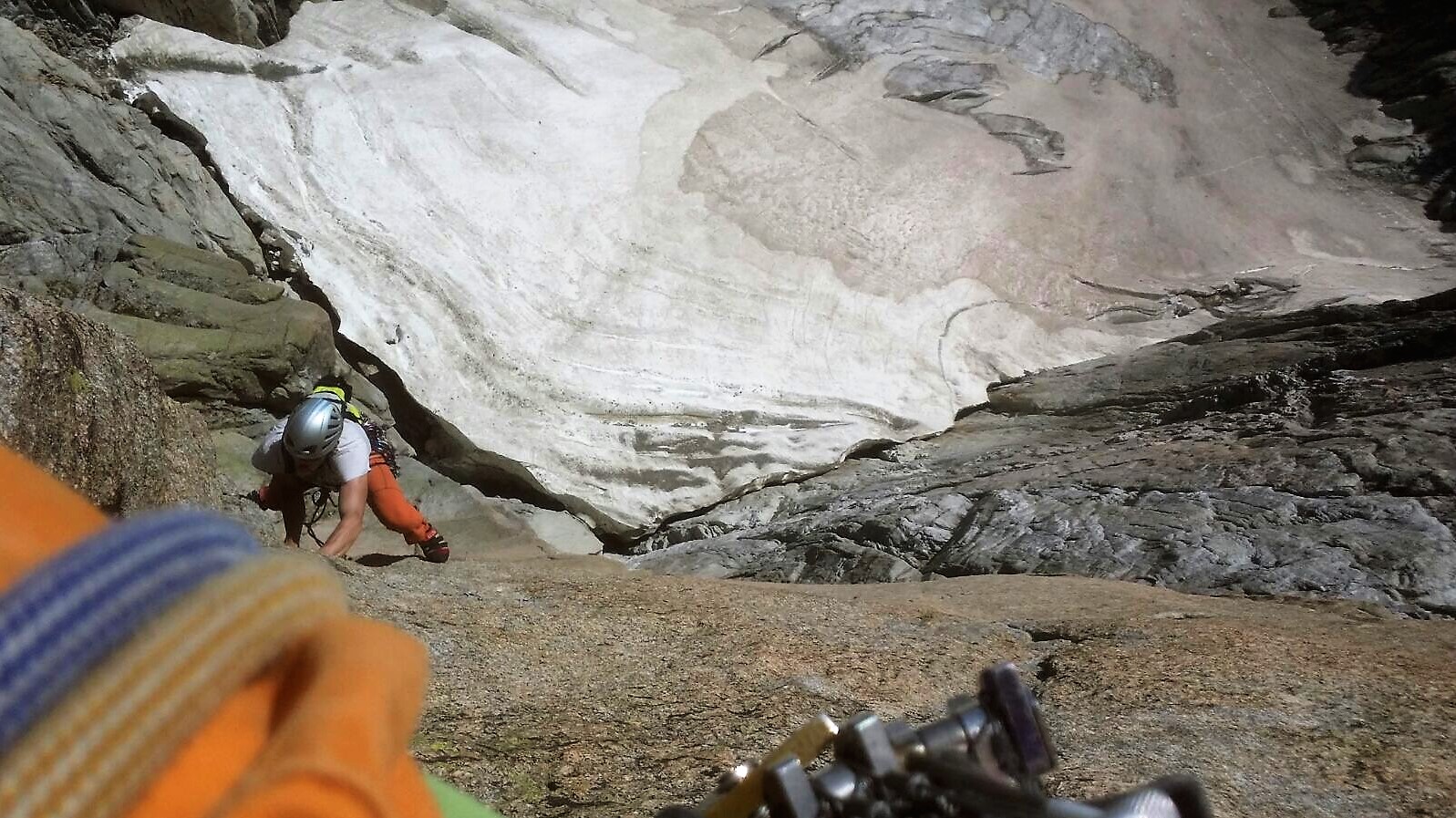 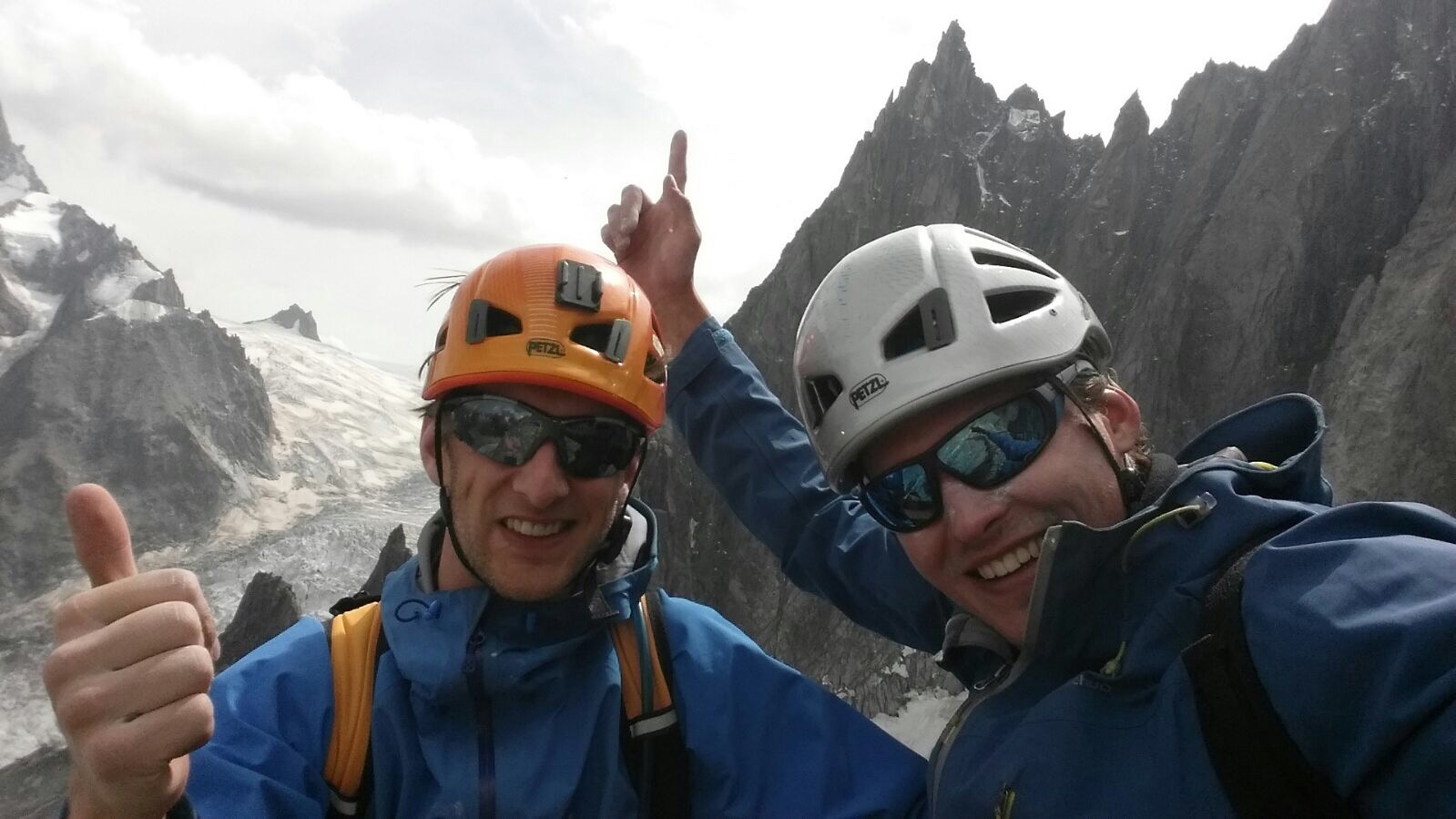 ‘the climbing doc’s’ on their best. Unfortunately there’s no photo of Guus climbing in his 3/4 shorts.

The first  pitch is no giveaway, big  runouts and not easy for the grade, and so are all amost all pitches in my opinion. It’s partly bolted, when it’s possible you have to protect it yourself with gear, ‘Piola-style’. Self-protection and bolts are 50/50 in estimation. In the middle part of the lower wall, we find a few partly removed or chopped bolts, which spices things a bit up..

When we are about to start with the five last (Children of the Moon) pitches, dark clouds roll in and it starts to rain lightly. Just as the weather predictions told us, but a bit earlier than expected.. We decide to start rapelling, as it is a long way down, and we don’t want to get stuck in a thunder- or hailstorm. Halfway the rappels it’s getting dry again, we regret we didn’t go further… 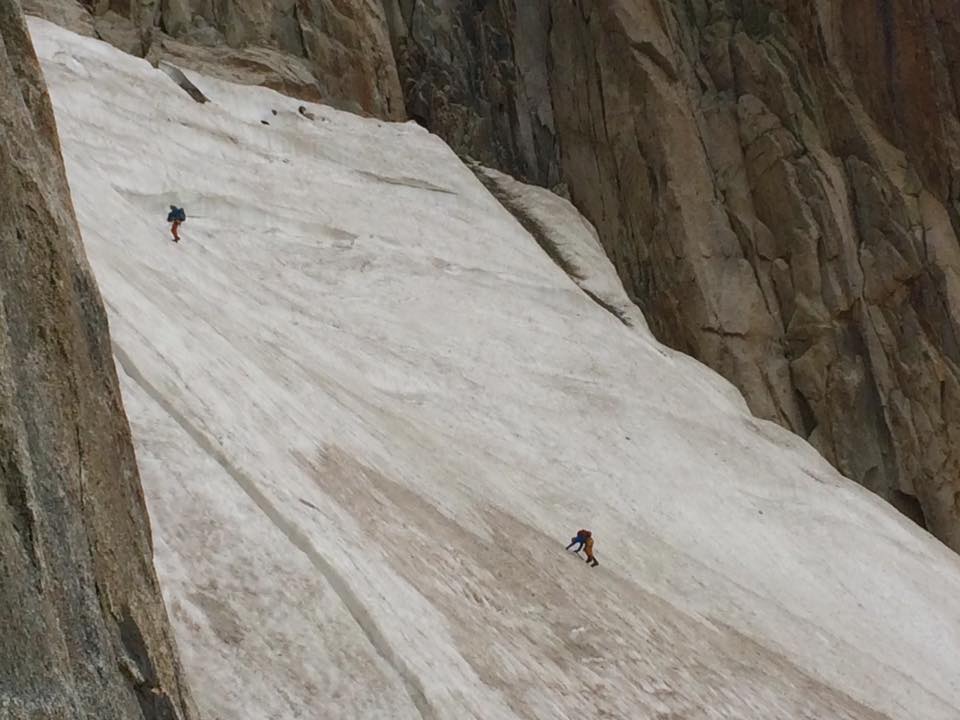 Loek and Guus descending the steep glacier after ‘Pedro Polar’

The next day we go for a short route (5 pitches, 6b+) in ‘Little Yosemite’, a 10 minutes walk from the Envers hut. Guus and Loek are climbing Amazonia in the meanwhile. Again it’s not that easy. First I fall from a tricky 6a+ slab, than Jelmers falls from the slippery 6b+ crux pitch. Than a beautiful clean 6a crack and an easy pitch follows. The 6a is finally a full pitch of jamming, very nice!

On the rappels down we try an appealing 6c crack which belongs to another route. It looks very esthetic and starts from a big comfortable ledge. The ropes are still in the anchor from the last rappel and we have to try hard toproping this one! No way we are going to lead it while placing gear right now! Hopefully next time.

The day after we move to the north side of the Aiguilles. After going down and up the ladders, we take the train down to Chamonix.  After some time buying supllies in Chamonix and having a shower at the campsite, we take the last cable car up to the Aiguille du Midi. Halfway we get off and walk 10 minutes to a sweet bivy spot in the rocky meadows underneath the Peigne. 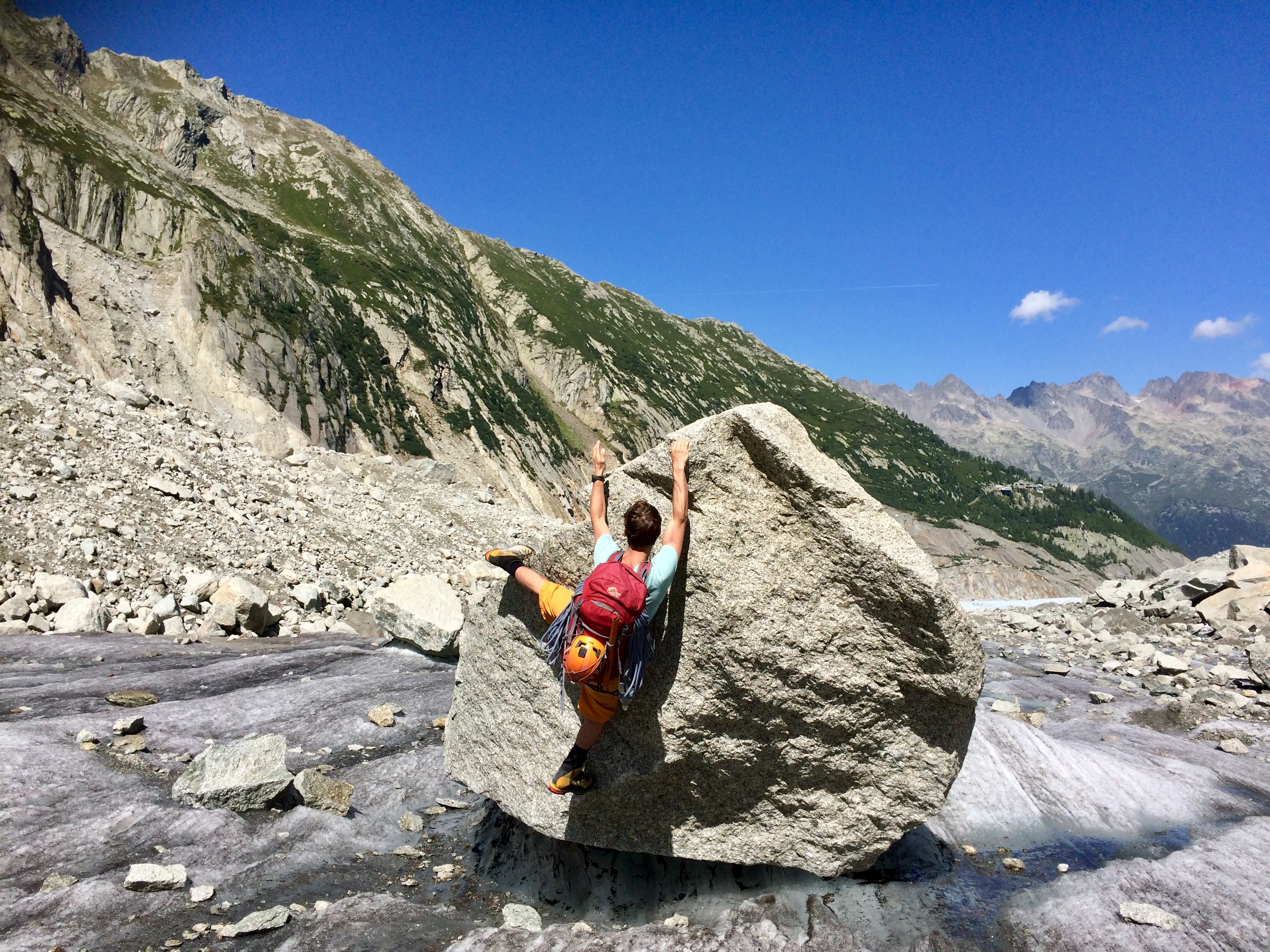 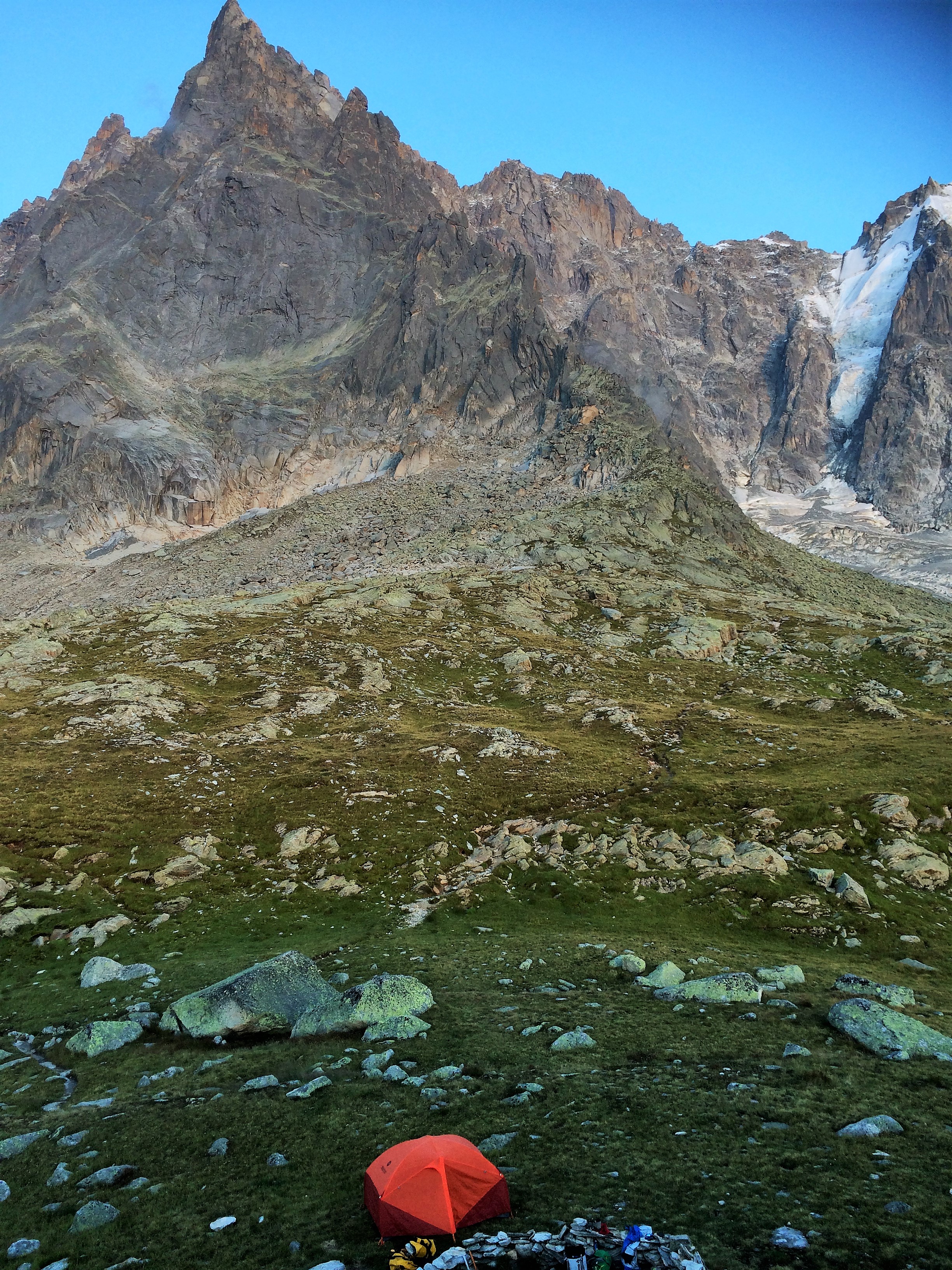 Free Camping below the Peigne 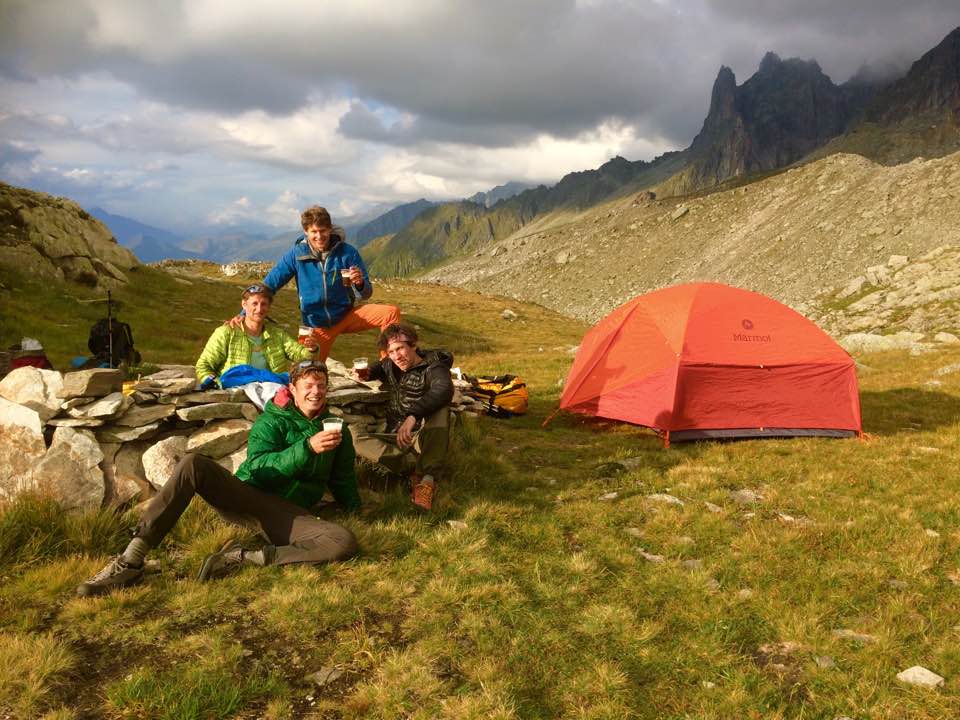 The next day we get up very early – a storm has been predicted for the late afternoon or evening so we have to be fast. It’s cold, I haven’t slept well and we drink our coffee in complete darkness. Furtunately we have a haulbag with us, where we can hide the food that’s left – many marmots here! :). Because there aren’t many other bivyers, we also feel comfortable leaving the tent standing (when it’s more crowded and other people do it as well, I would have felt bad about this, don’t wanne make a campground of this place).

We walk up the moraine towards the start of the Peigne ‘normal route’. Our initial plan is to do Some exposed scrambling at the slabs just underneath the start of the climbing. There are a few other parties, slowly progressing, but Jelmer and me overtake quickly while simul-climbing. The first 8 pitches or so we climb on our approach shoes, saving the toes.. Loek and Guus first climb a variant on the right and after two pitches we are all in the same route. We don’t look in the topo anymore and just follow the line of least resistance. Our initial plan was to climb the ‘normal route’ to a breche and then climb the 7 pitches of an unknown route on the north side of the mountain, but than we had to start at a completey different place (I see afterwards). We just stupidly followed other’s peoples traces. However, I feel good that we didn’t do the normal route, it looks super loose and sketchy (especially the last part to the breche).

When the real climbing starts, there’s an ‘amazing’ chimney. Graded 5c, but it feels like a 6c! Slippery, old-school, difficult.. While Jelmer is seconding it, another party comes from a belay lower onwards, but the leader is unable to climb it and Jelmer has to overtake him. A big hassle. We don’t see them anymore higher on the route. 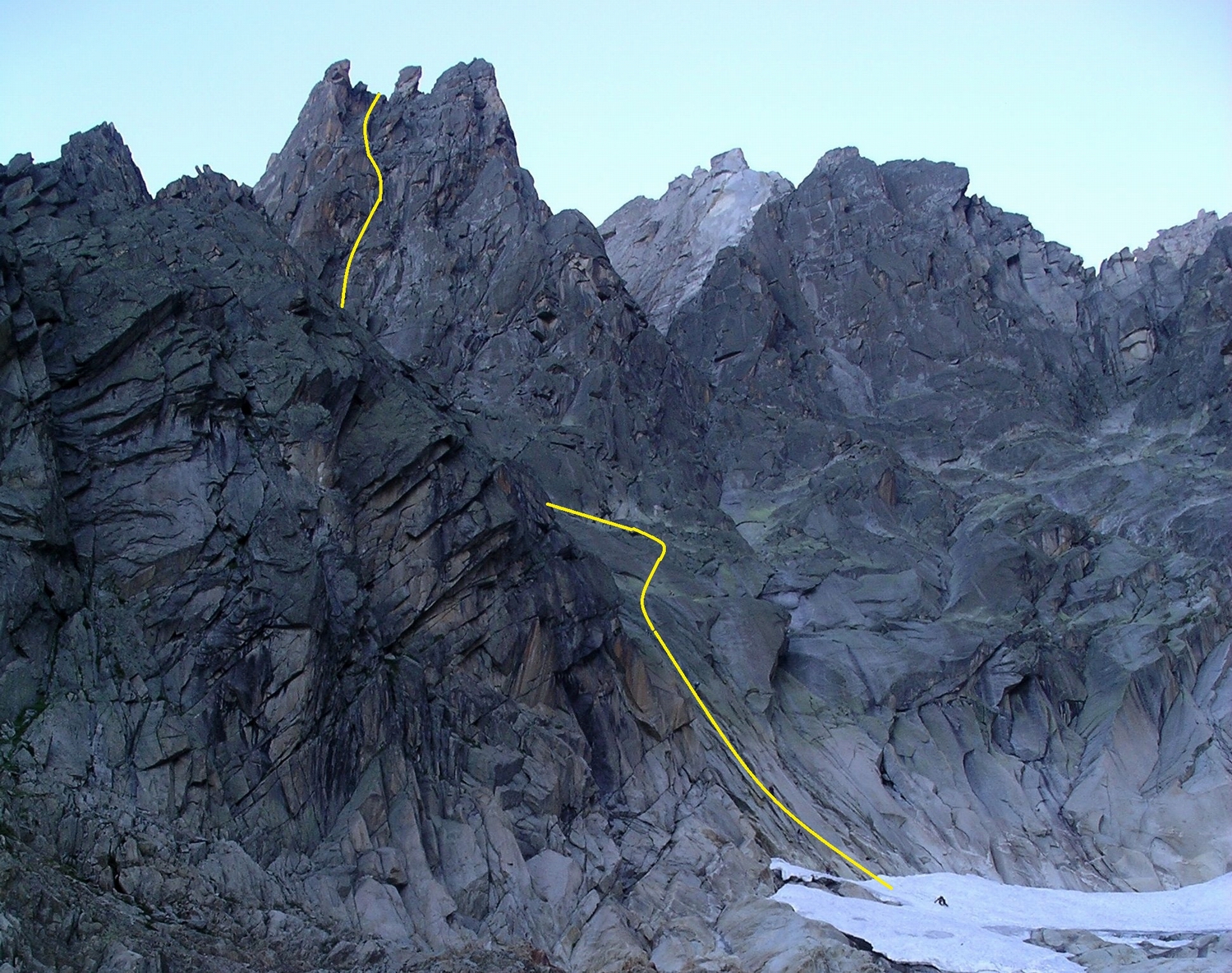 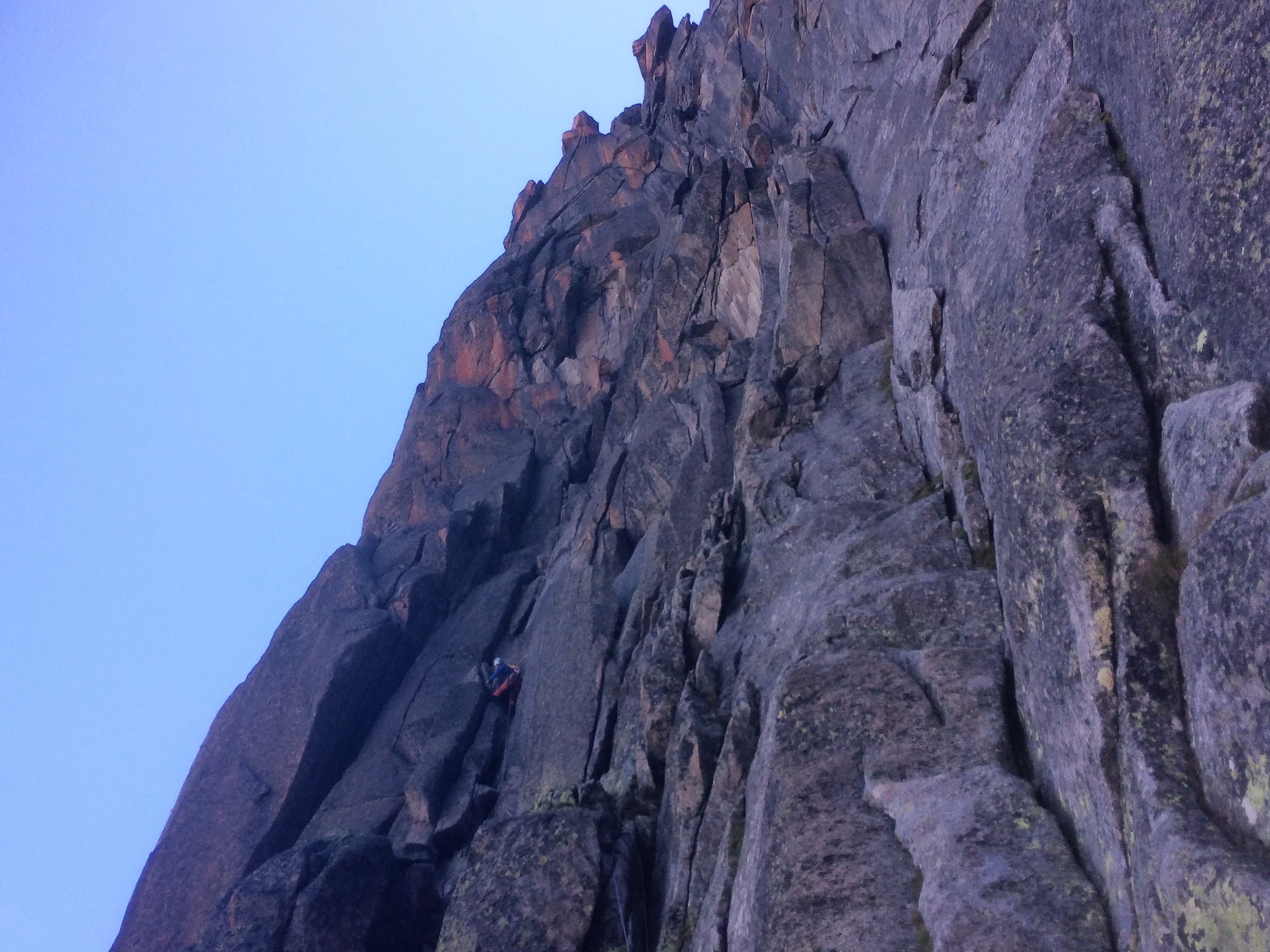 Loek in the lower part of the route 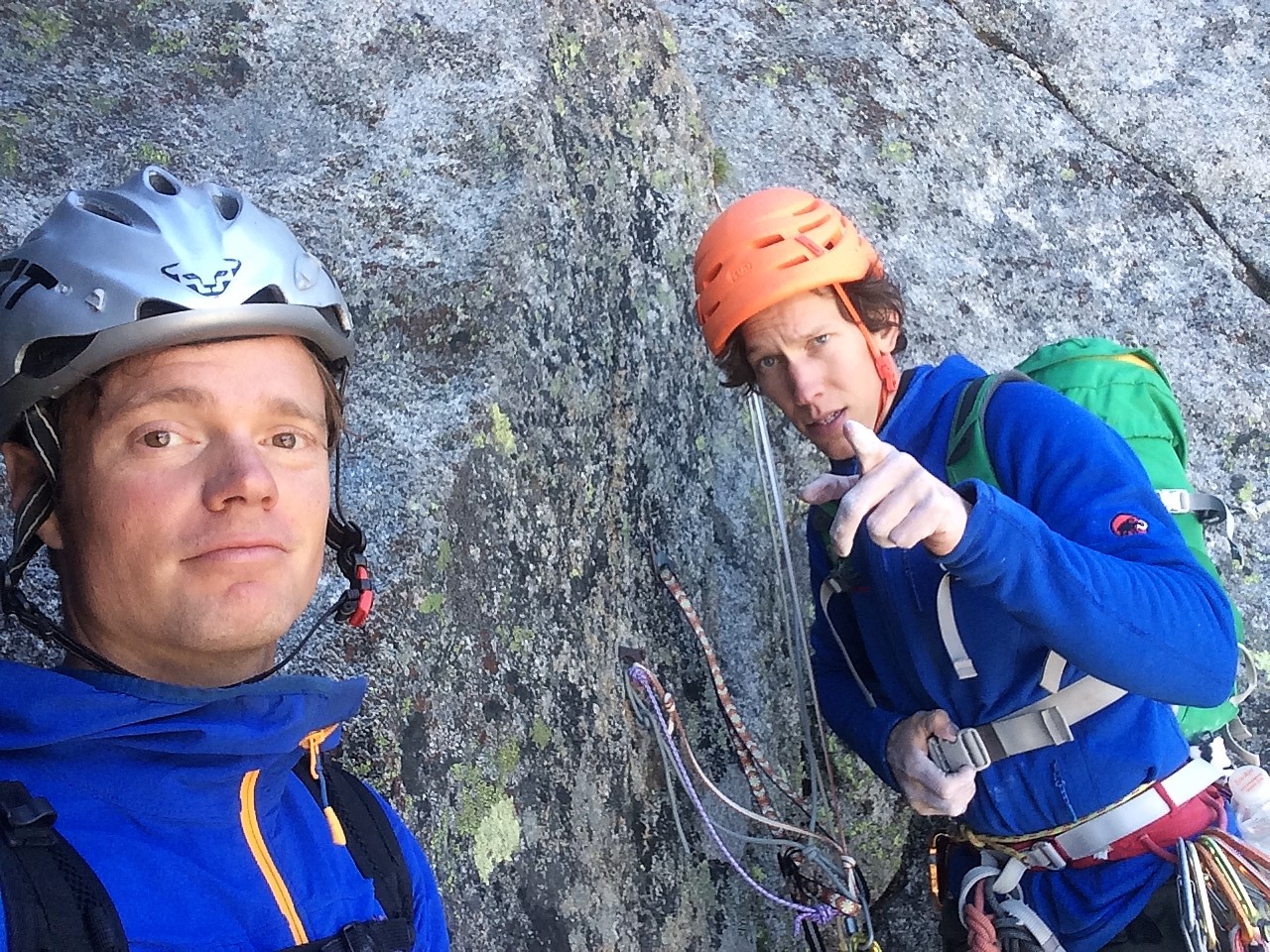 Two boys on a mission 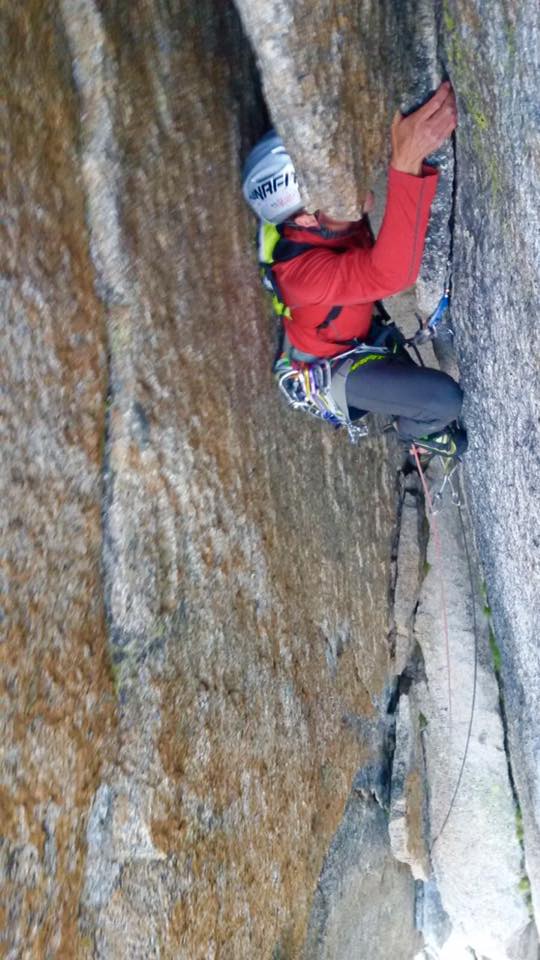 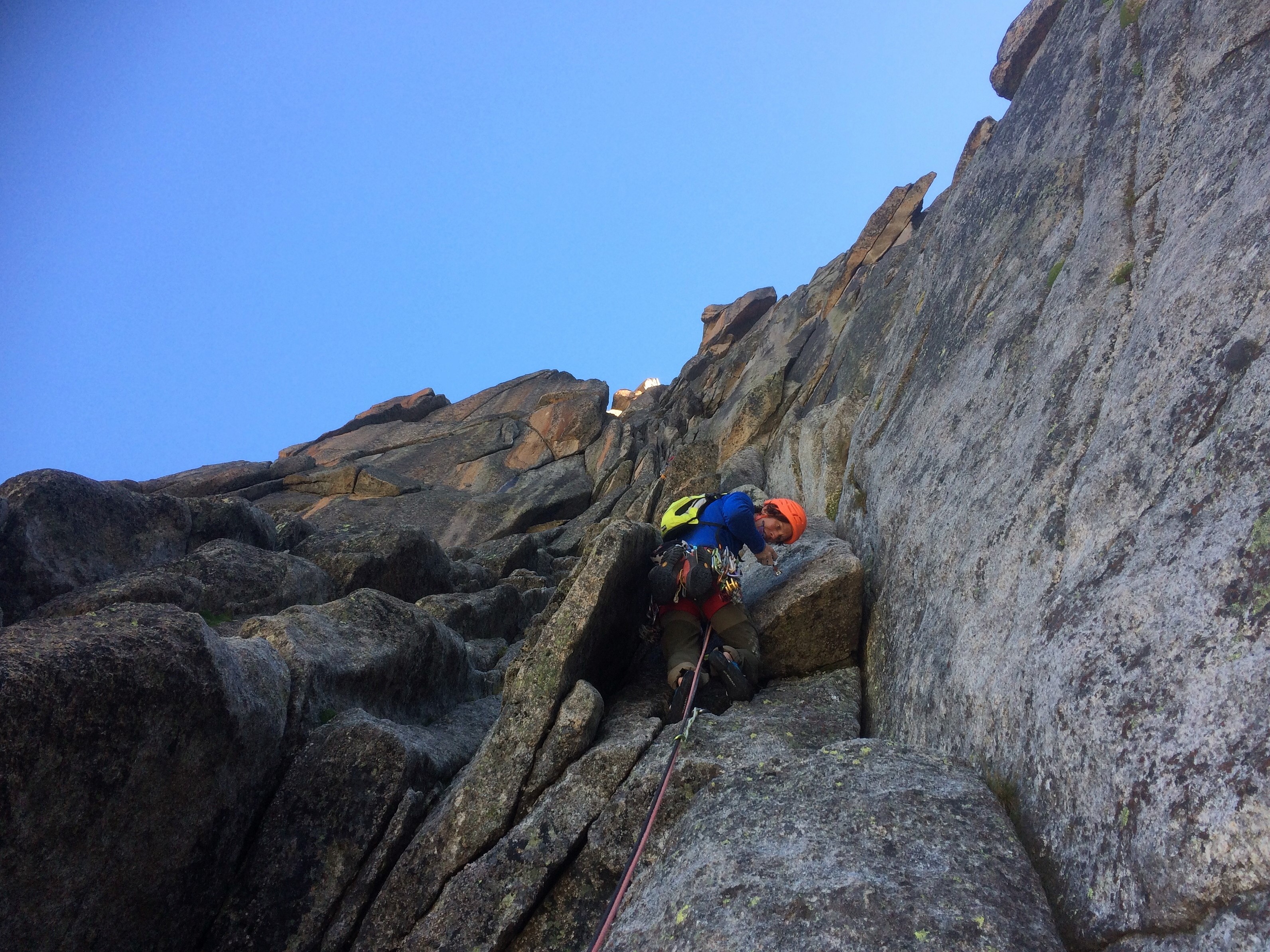 Jelmer in the upper part of the route 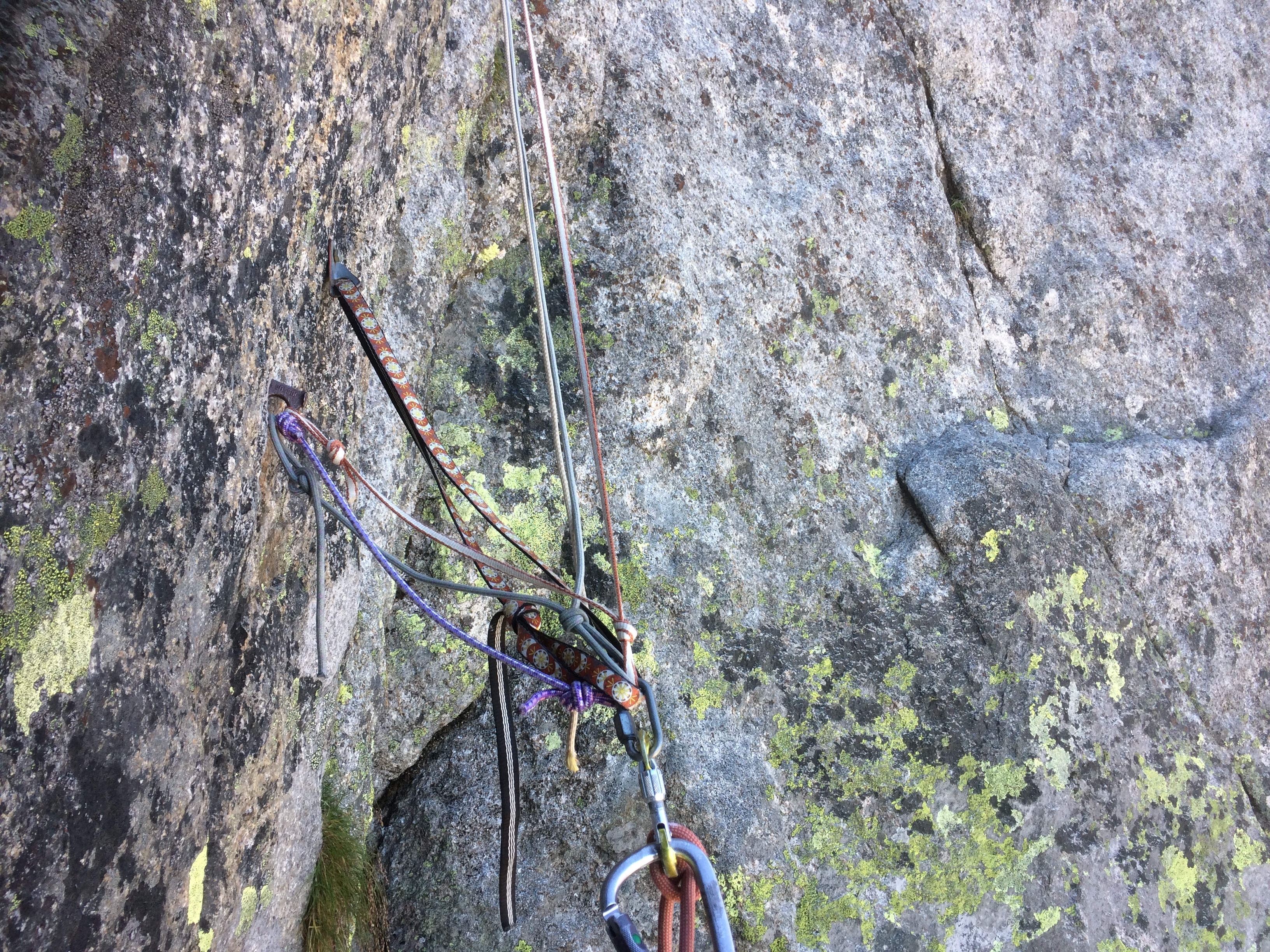 Typical belay station for this area 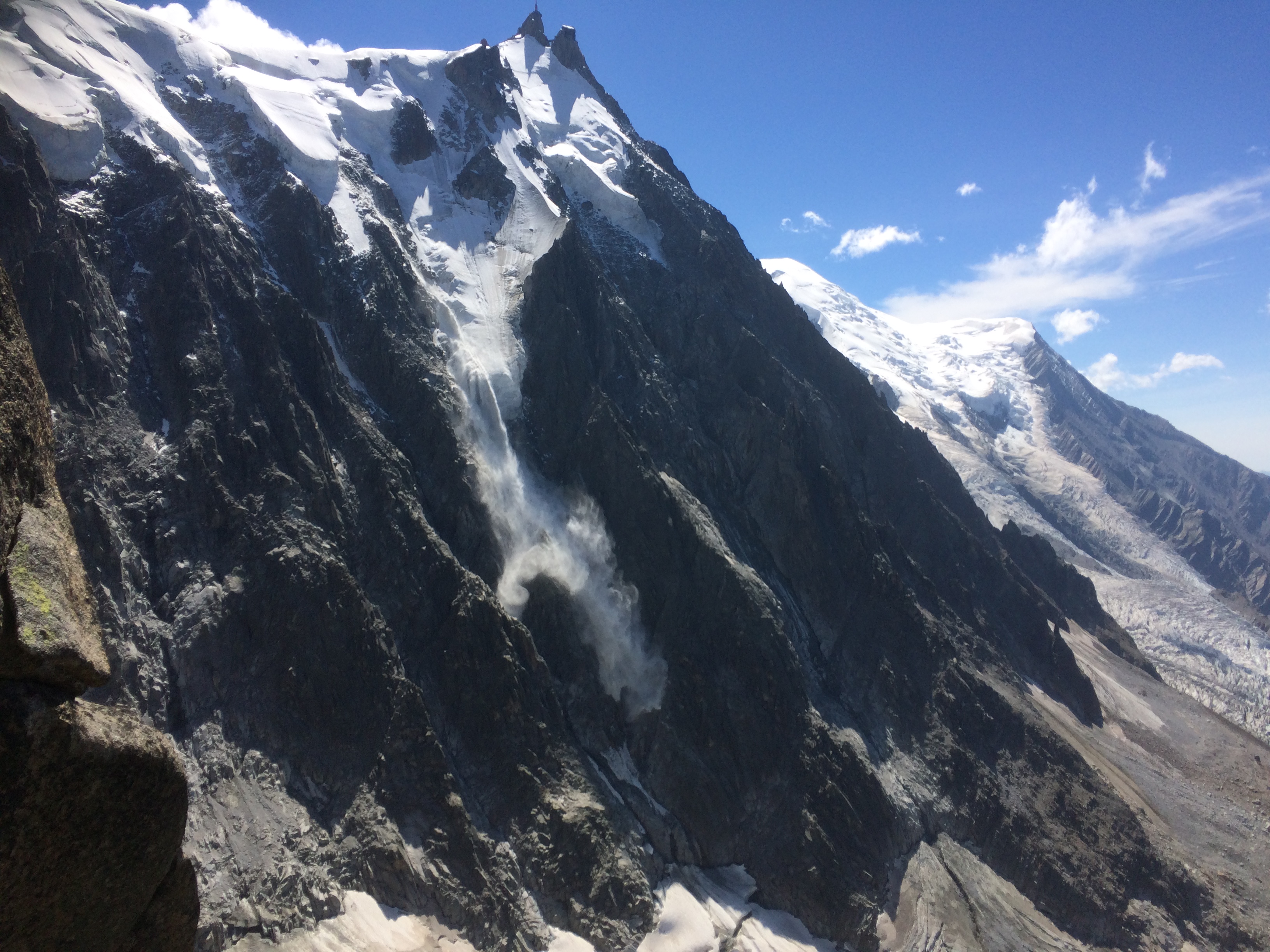 Numerous avalanches left of the Frendo 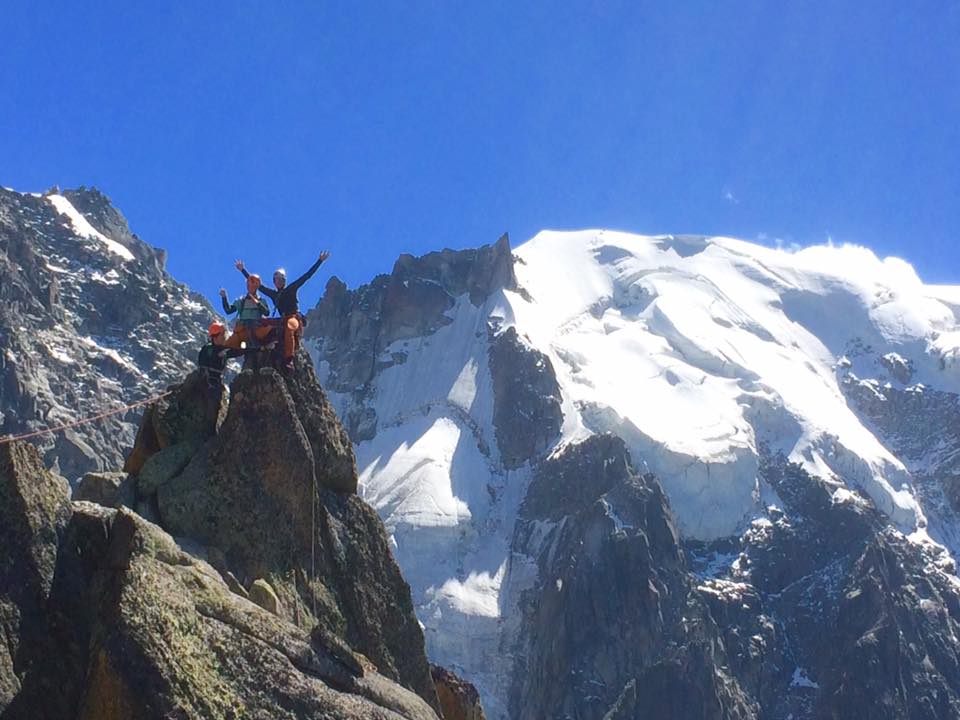 Guus, Jelmer and Loek on the Peigne’s red pillar.

After in total 14 old-school climbing pitches we reach the top of the route and quickly start rappeling. Clouds are already showing up. We rappel over a route I really want to climb next time, looks much harder but also more beautiful than the Contamine-Vaucher!  Back at lower grounds we start hurrying even more. We walk back to our bivy place, pack our stuff and move towards the cablecar station. 10 minutes after we have entered the station, hell breaks loose and a big thunderstorm starts. The cablecar is unable to run and we have to wait for at least 1,5hrs before we can descend to Chamonix. The employees of the cablecar company do everything they can to make it comfortable for the waiting passengers; drinks, food, blankets, everything is there for us, and we are not even Japanese tourists! Still many poor climbers on the mountain in the meanwhile.. (hopefully everybody was fine)

Before returning home (and after being a bit tired of longer routes), we discover a nice sportclimbing area close to Sallanches, around 20km’s from Chamonix. We spent the last day here. Guus and Loek stay for some days in Chamonix, pitch a tent on glacier and climb the Voie des Pays-Bas on the Grand Capucin, the lucky b*stards! We return home with a backpack full of new plans and mountains to climb!