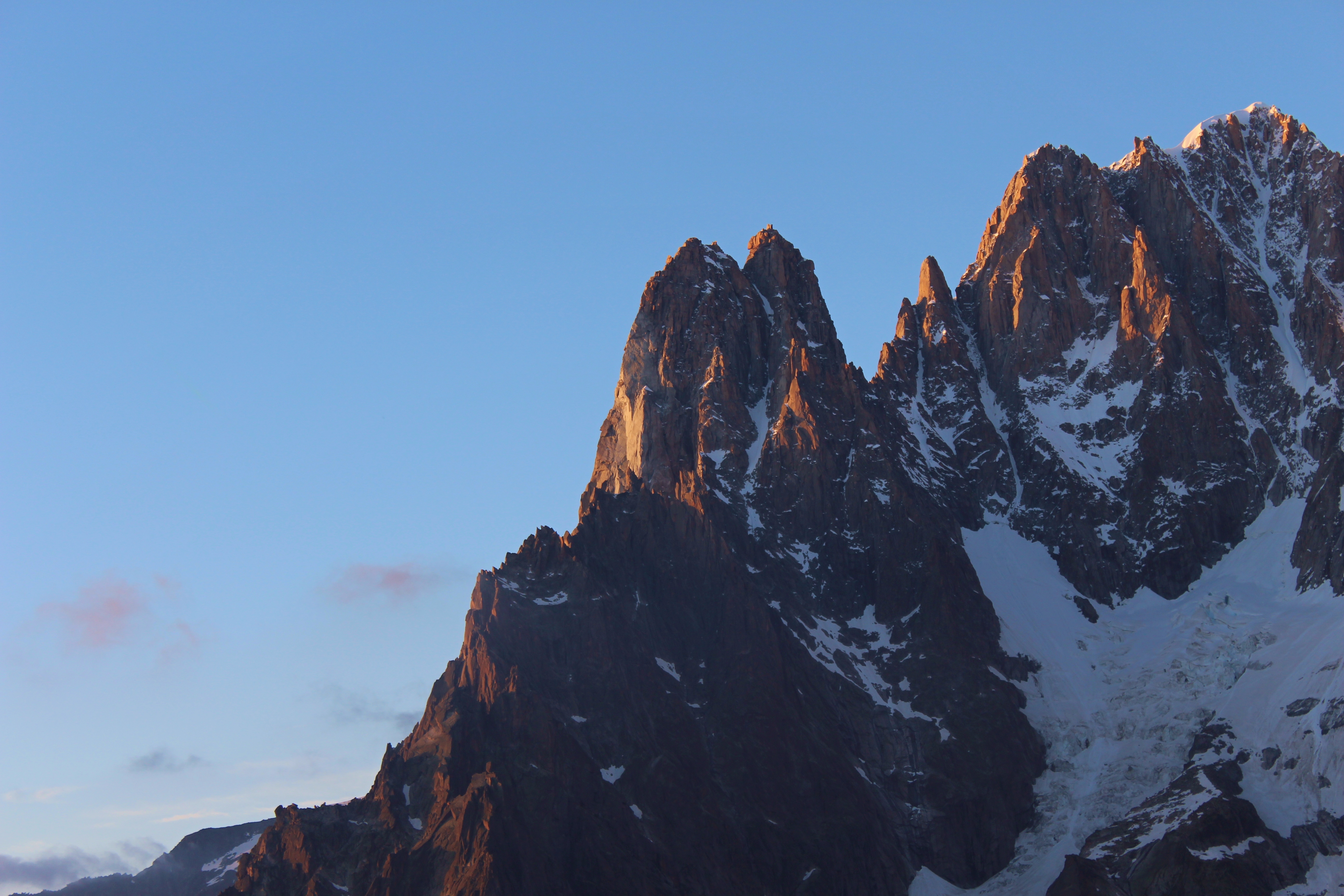 By the beginning of July, Harald, Laurens, Jelle and me decided to head to one of the most iconic & dramatic peaks of Chamonix and the western Alps: the Dru’s.

The ‘petit Dru’ (3.733m) and ‘grande Dru’ (3.754m), together refered to as the Dru’s or Dru, are true eyecatchers from the Chamonix valley floor, but even more impressive from the trainstation of Montenvers. I could never stop staring at it and dreaming about climbing it once.. During the winter two years ago my fascination even got bigger when skiing underneath its enormous north face. 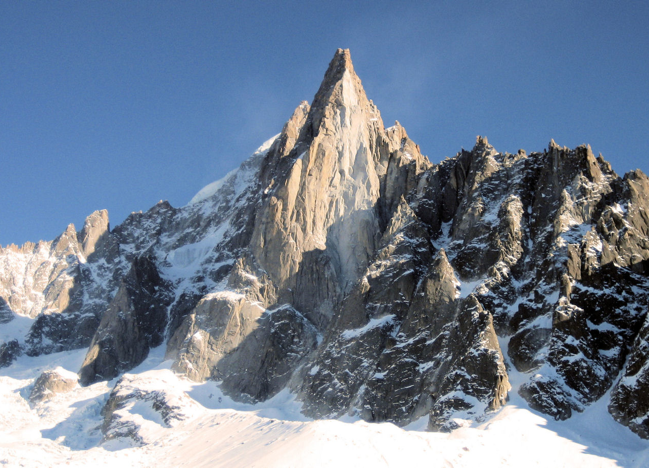 The Dru’s are attractive for many climbers due to their immense steep granite faces and of course their history and reputation. The first ascent of the Grande Dru was by  two Brithish alpinists with their guides, who climbed it via the south-east face during September 1878. The Petit Dru was climbed first in the following year, in August 1879. At the time of the first ascent of the north face (Pierre Allain and R. Leininger, August 1935), Pierre Allain considered the west face to be unclimbable. However, a French/Italian team succeeded on the face in a series of attempts in July 1952 using considerable artificial aid. In August 1955, the Italian climber Walter Bonatti climbed a difficult solo route on the south-west pillar of the Petit Dru (the ‘Bonatti Pillar’) and a more direct route up the west face than that taken in 1952 was climbed by Hemming and Robbins in 1962, the ‘American Direct’.

Another thing that the Dru’s are famous for, are series of enormous rockfalls that appear every now and then. Especially the west face of the Petit Dru, where the famous American Direct route is and the even more known Bonatti pillar once was, needs to be avoided during summertime. In 2005 a gigantic rockfall destroyed the Bonatti pillar, the American Direct mostly survived, but is preferably climbed now with lower temperatures in spring or in autumn. 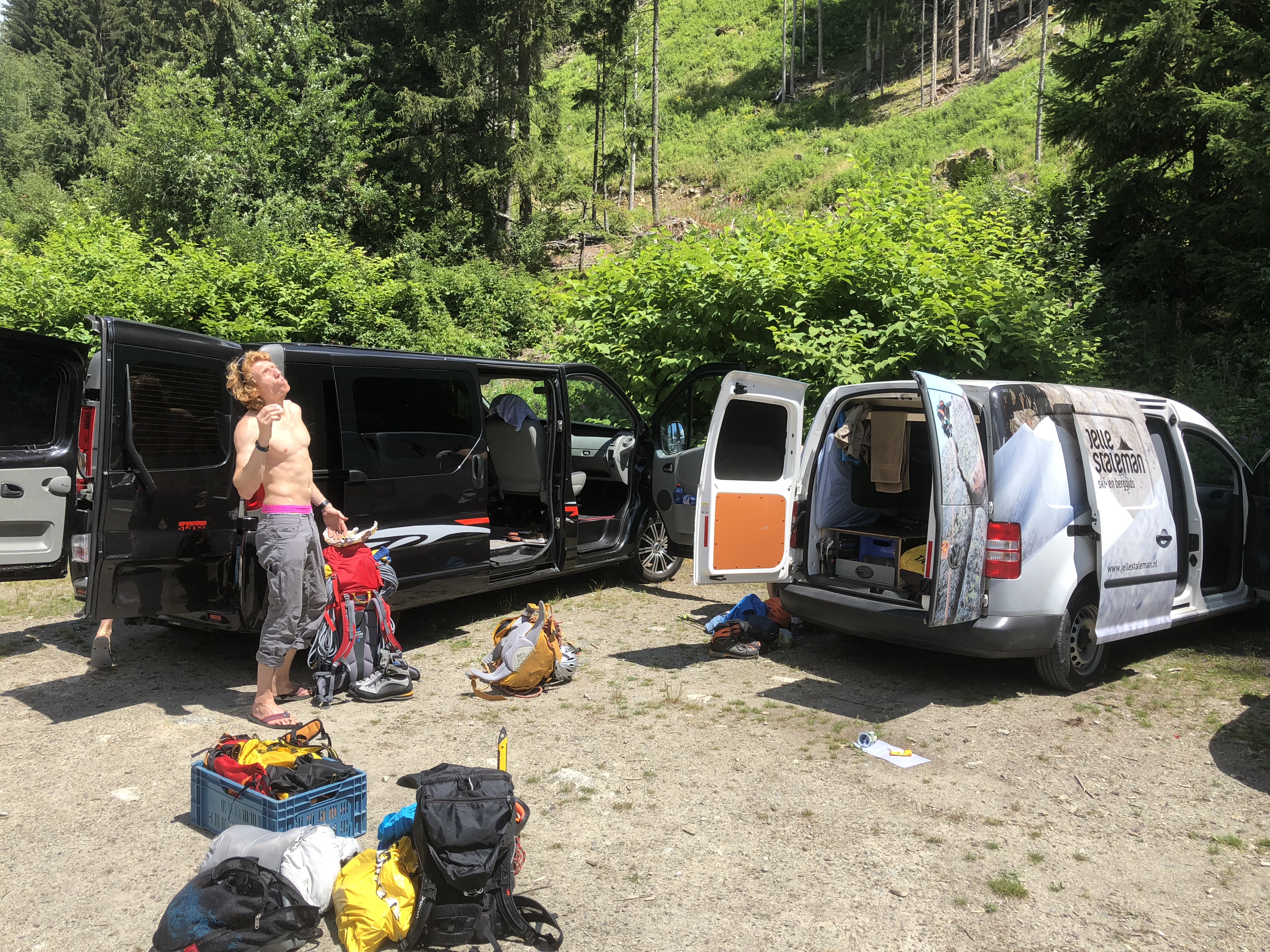 Laurens enjoying the sun while packing the bags

Back to our adventure

It’s summer in Chamonix when we arrive with Harald’s van. We meet up with Jelle, who is waiting for us for hours, as we got stuck in traffic jams. The airco in the van is not working yet and we were slowly destroyed by the intense heath, so we arrive in a pretty wasted state. But…. of course our motivation makes up for the heavy bags and our tiredness. I feel excited as a kid to go up. 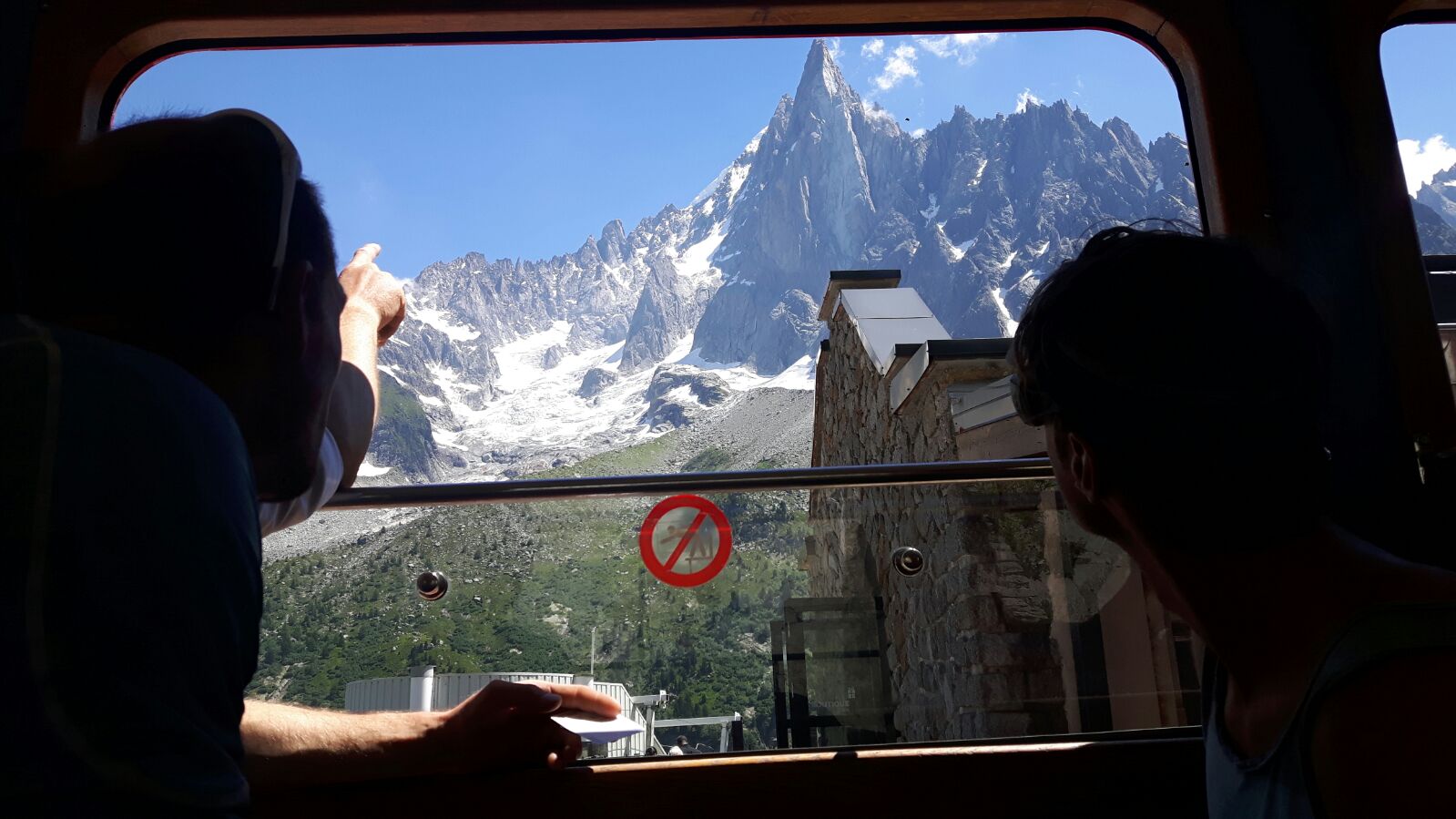 The Refuge de la Charpoua (2.841m) is a very small, bivaouc hut style, in a quiet part of the Mont Blanc massif. It barely fits 12 people and it’s around 20 square meters, but still guarded by one person the whole summer long!

Although the refuge looks close, it’s taking hours and hours to get there: first downclimb the stairs to Mer du Glace, walking for an hour or so on the glacier, climbing the steep stairs on the other side, and then walking up to the hut (with yes, stairs waiting for you just before reaching the refuge). Without acclimatization it took us around 4hrs. 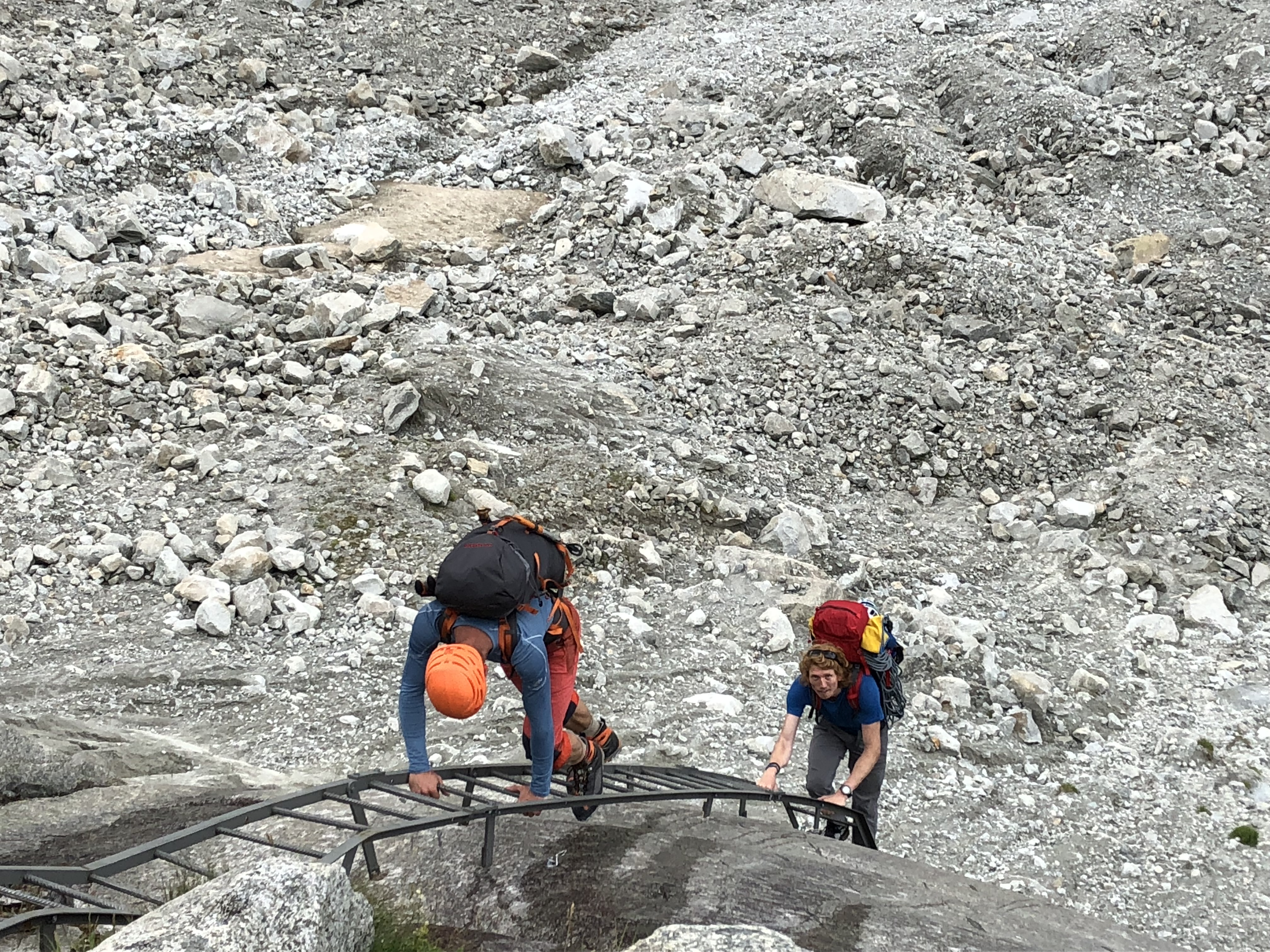 Jelle and Laurens ascending the first stairs to the Charpoua hut 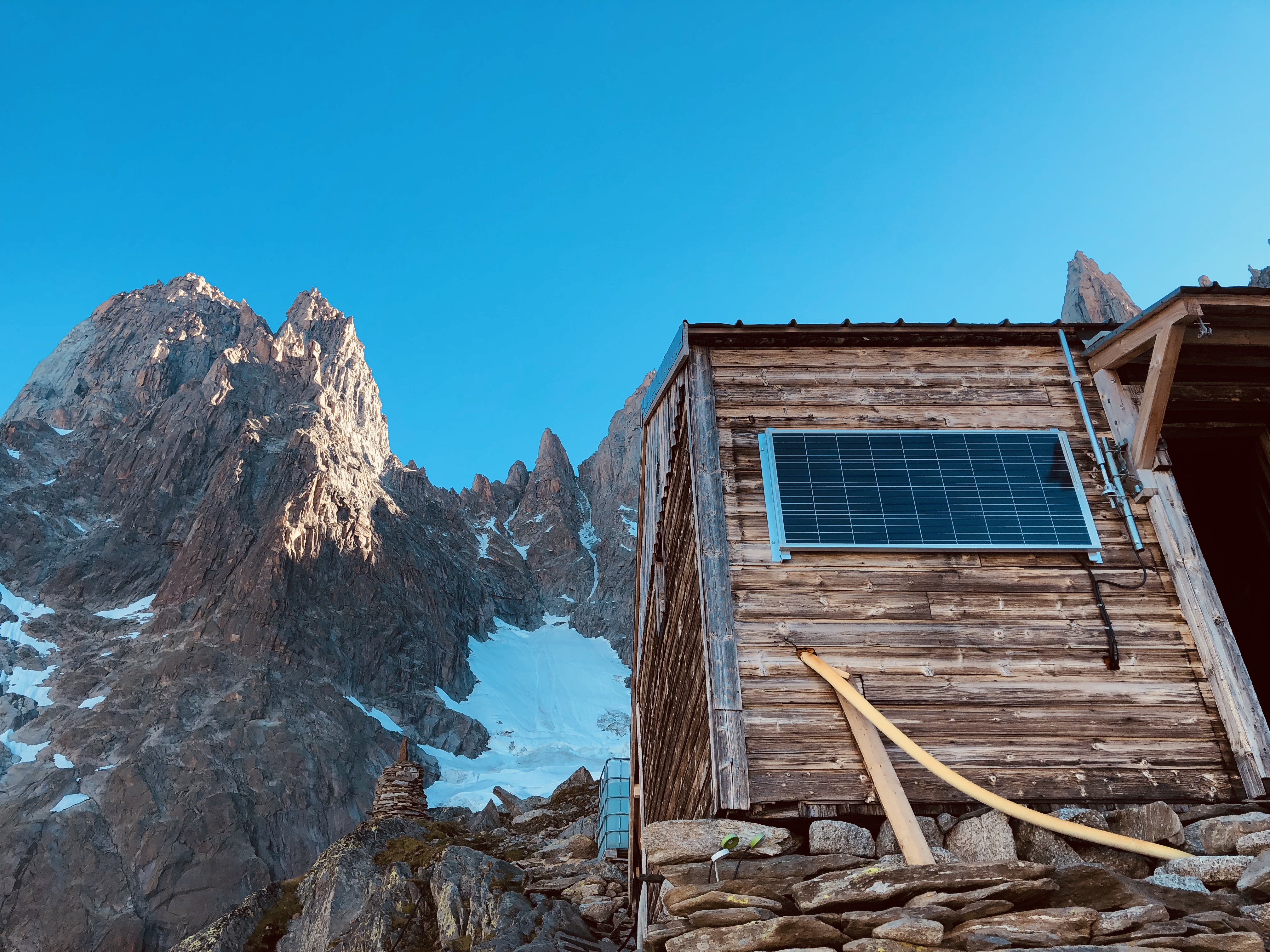 Charpoua hut & Dru’s on the left

After arrival, we sit & drink outside in our down jackets (finally it’s cold) and make plans for our acclimatization climb for the next day. It’s gonna be a climb close to the hut, approximately 30mins away, and 6a/b max.

First we have to get used to efficiently use the cramped hut. There is hardly any space to put your backpack and we have to be quick to get some place to sleep (30-40cm wide each). We are with around 20 people for the 12 places….. 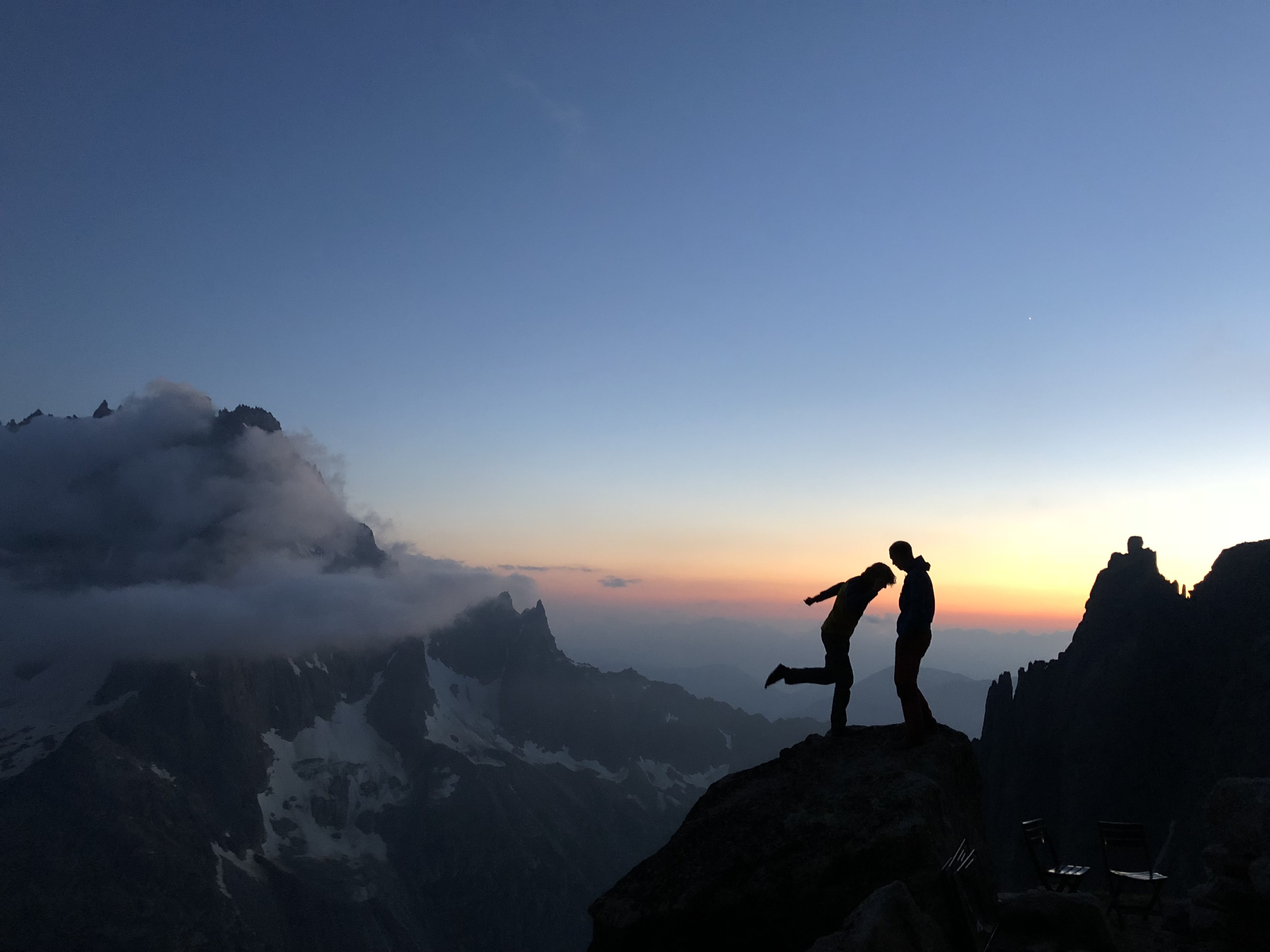 Setting sun at the hut. Addicted to these views 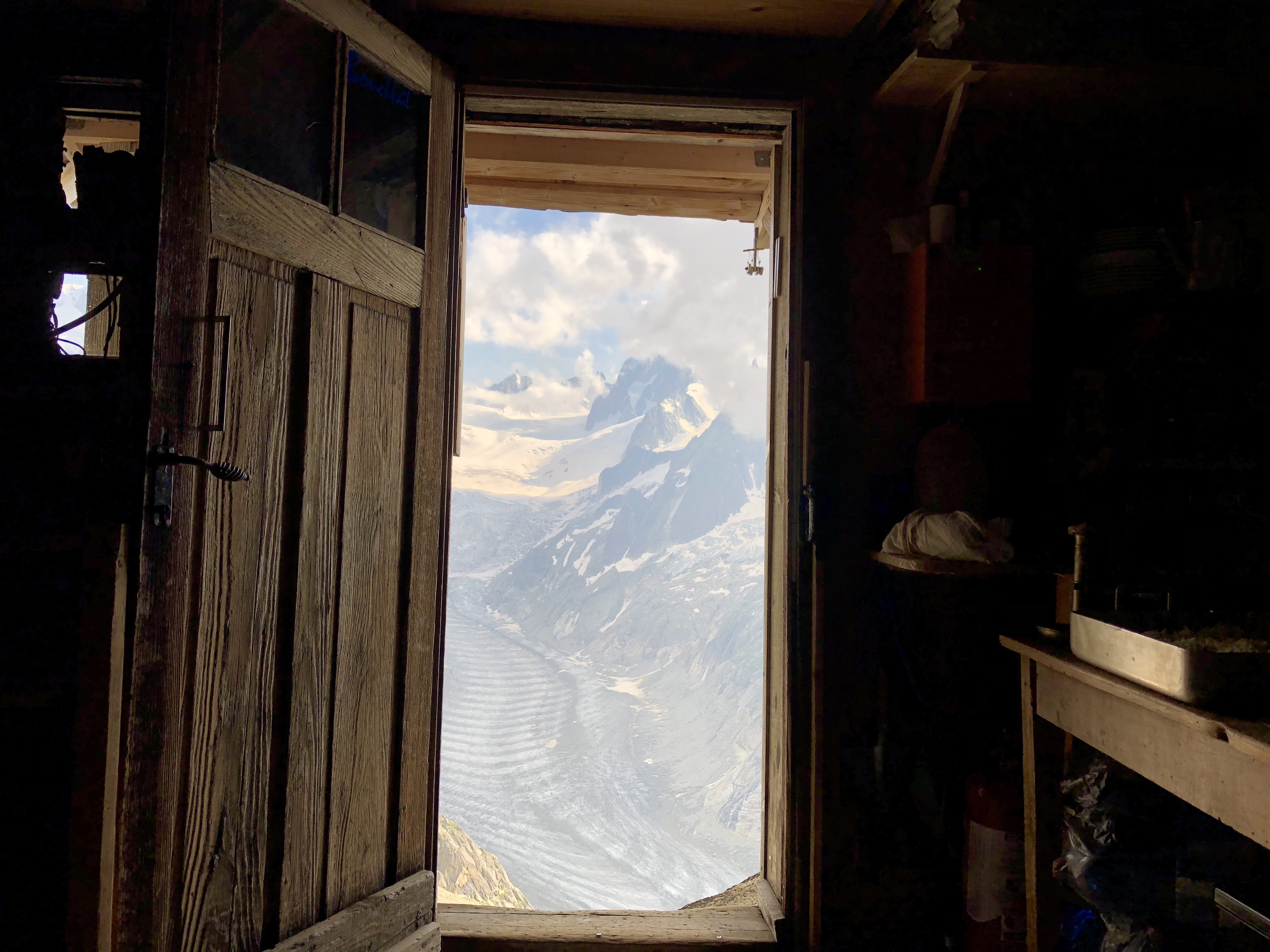 The next day starts relaxed. We have breakfast, drink coffee and walk to the start of the route by crossing some snowfields and scramble a bit.

I forget the name of the route we climbed, but a few pictures are shown down here. The only thing I can recall is how soaking wet the second pitch was (respect Laurens, for leading it!) 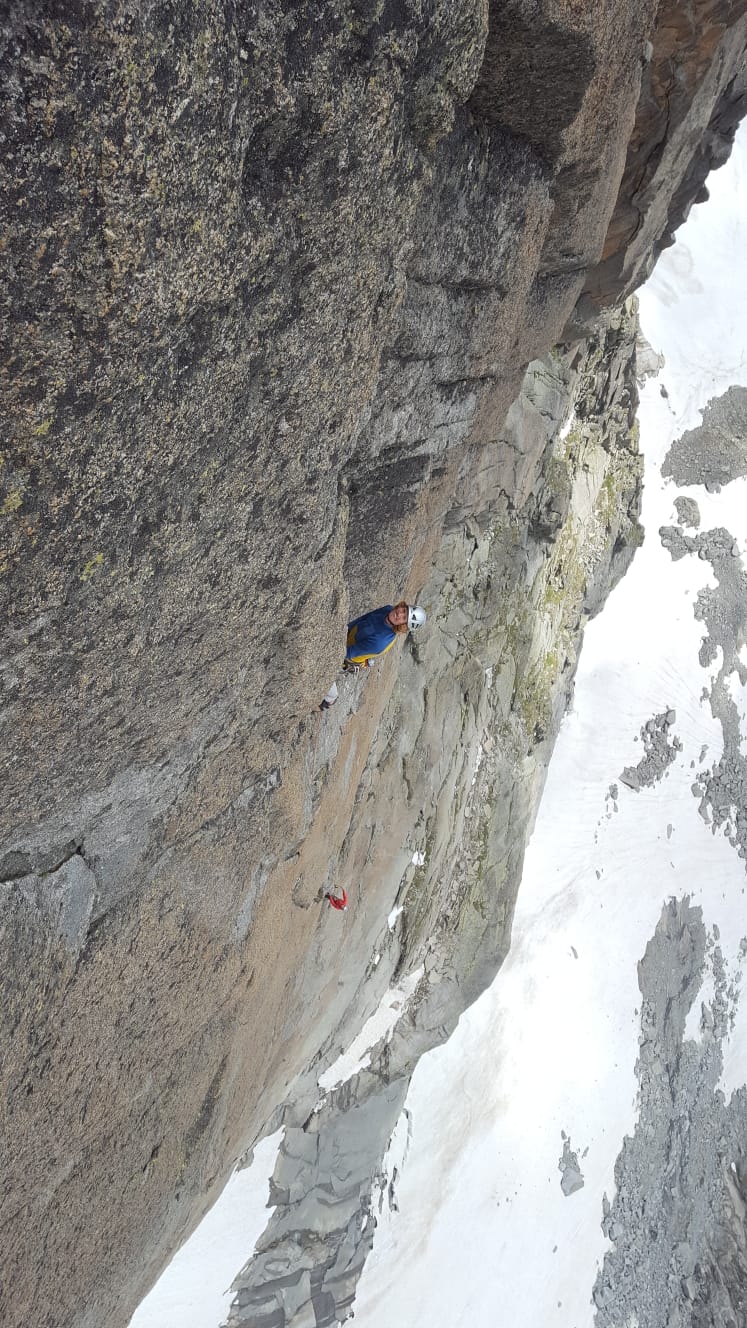 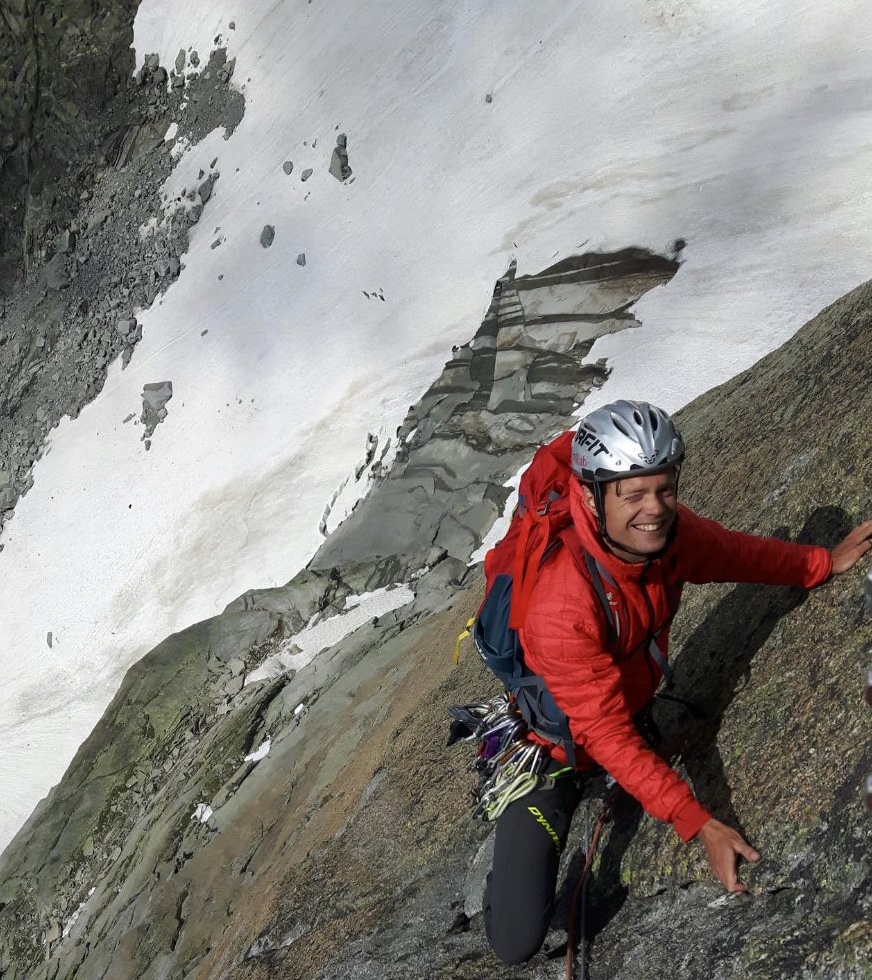 Me enjoying the Chamonix granite 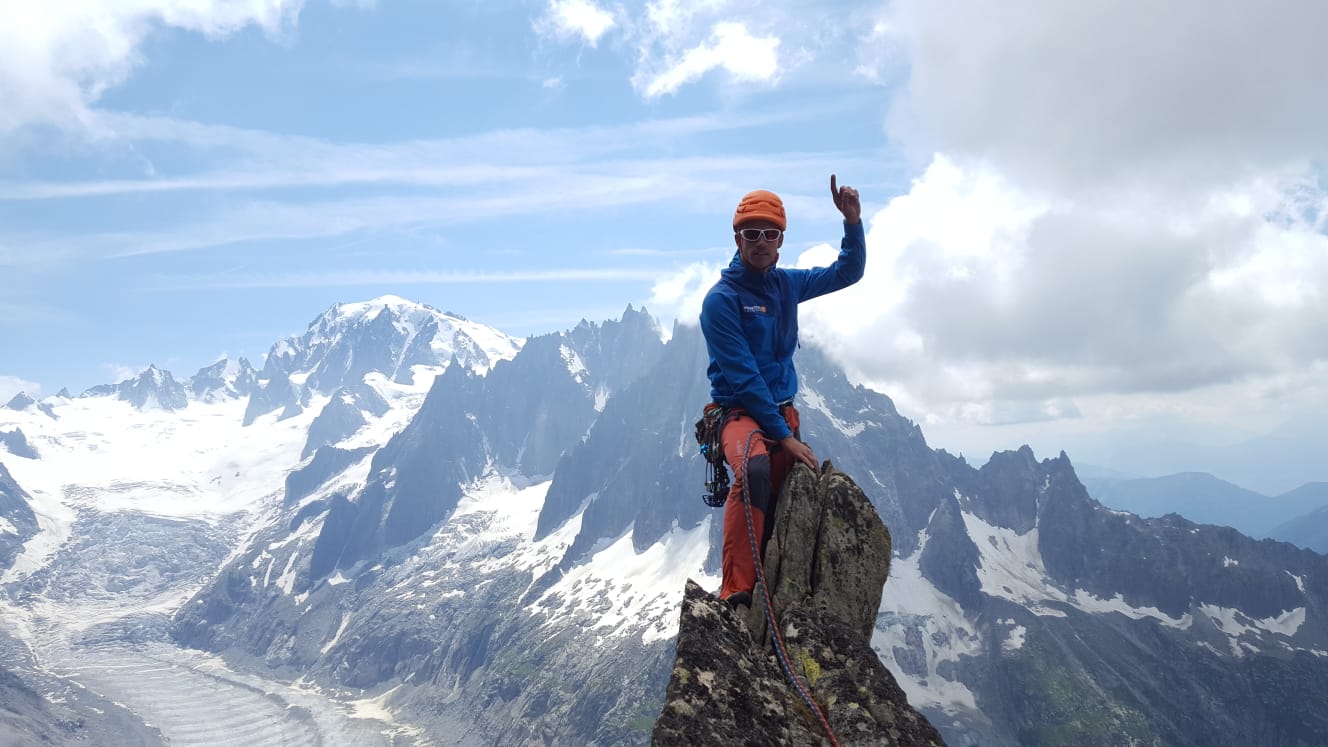 Jelle on top with the Envers and MB in the background 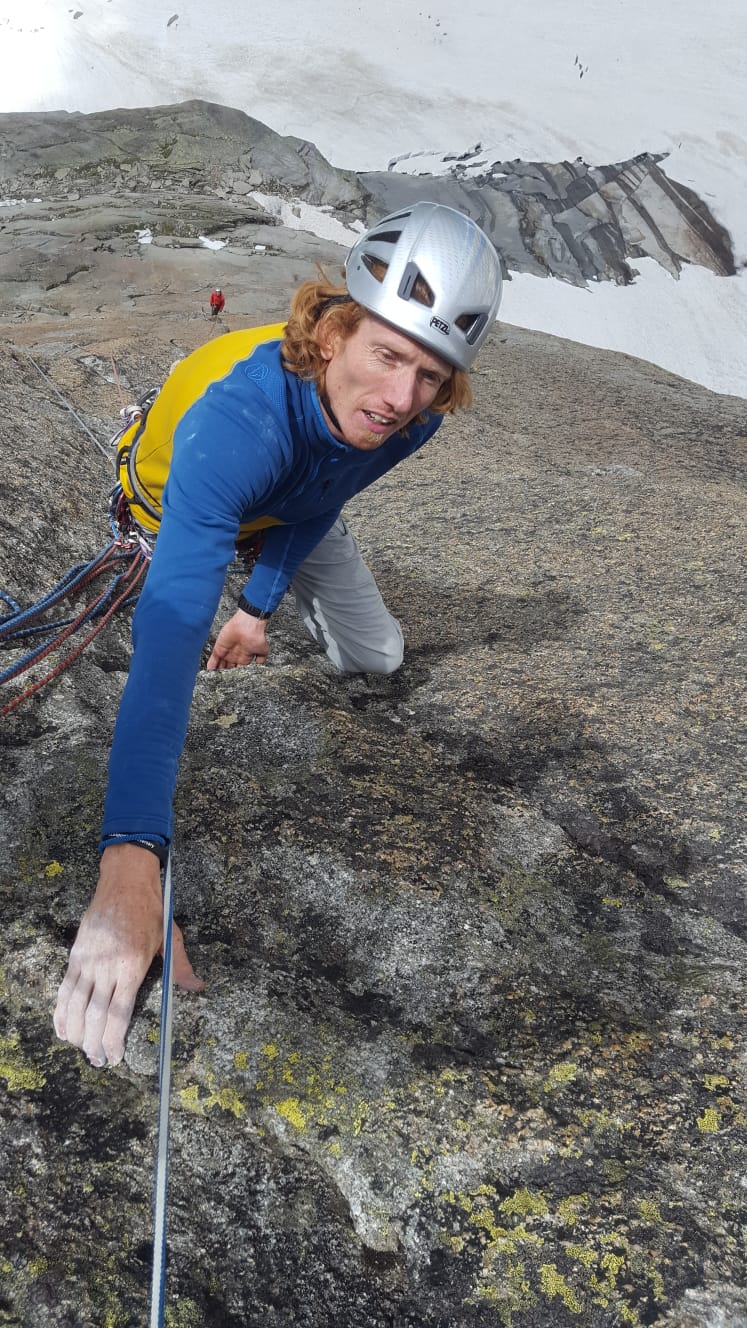 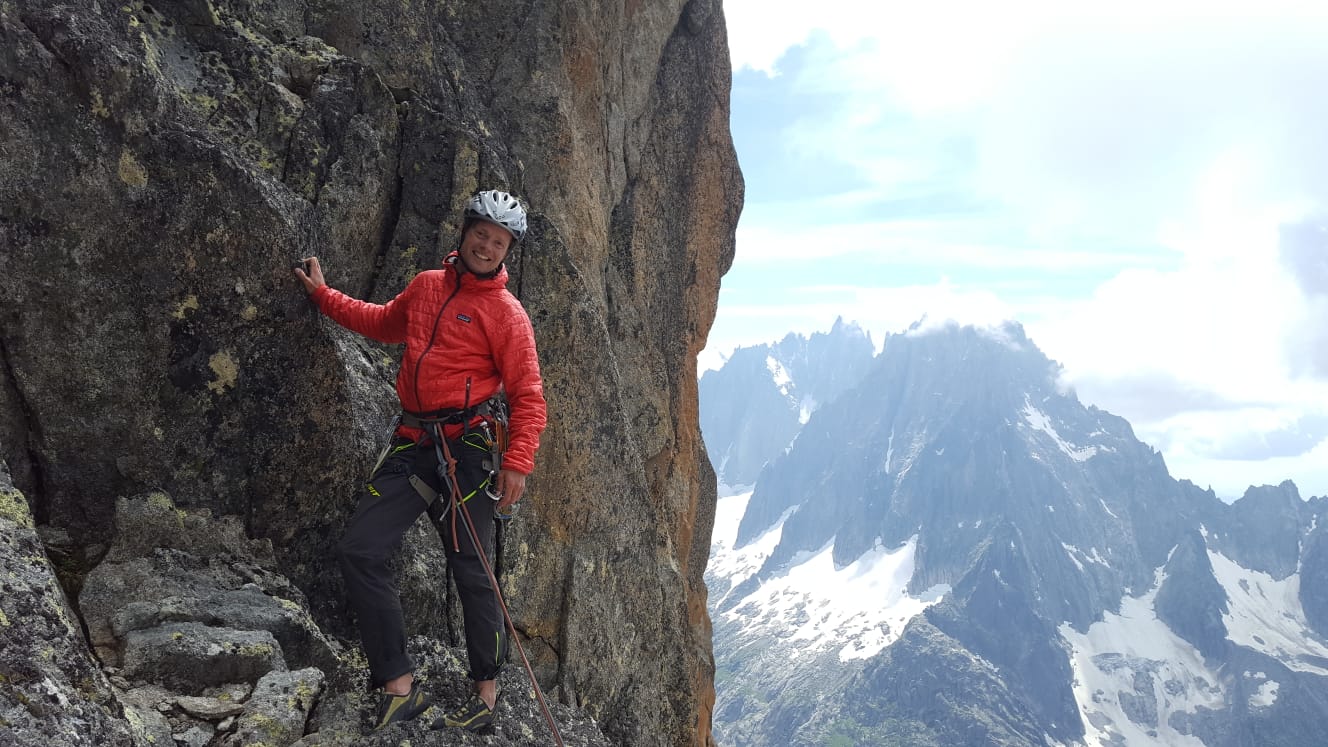 Me at the breche close to the end of the route 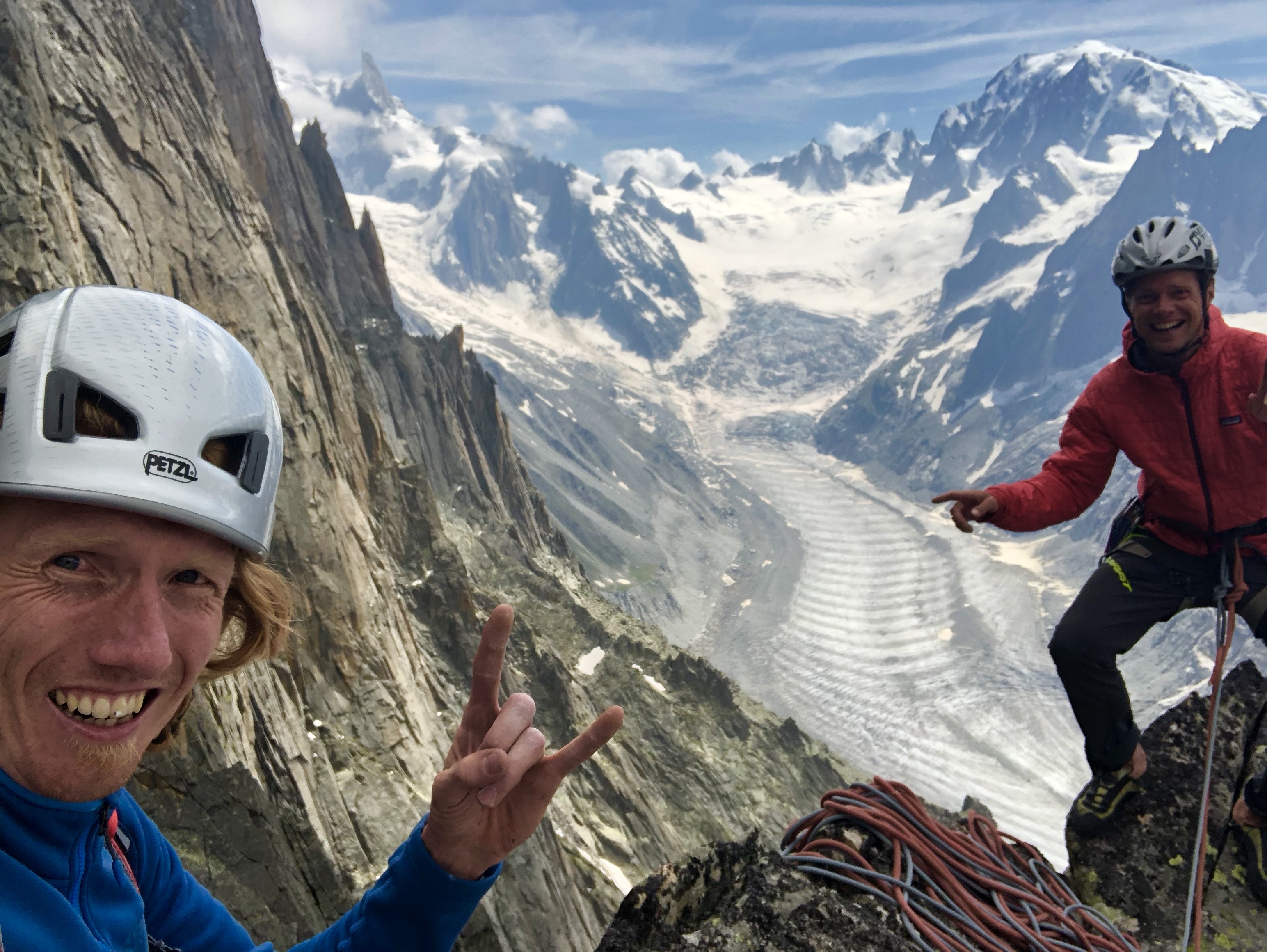 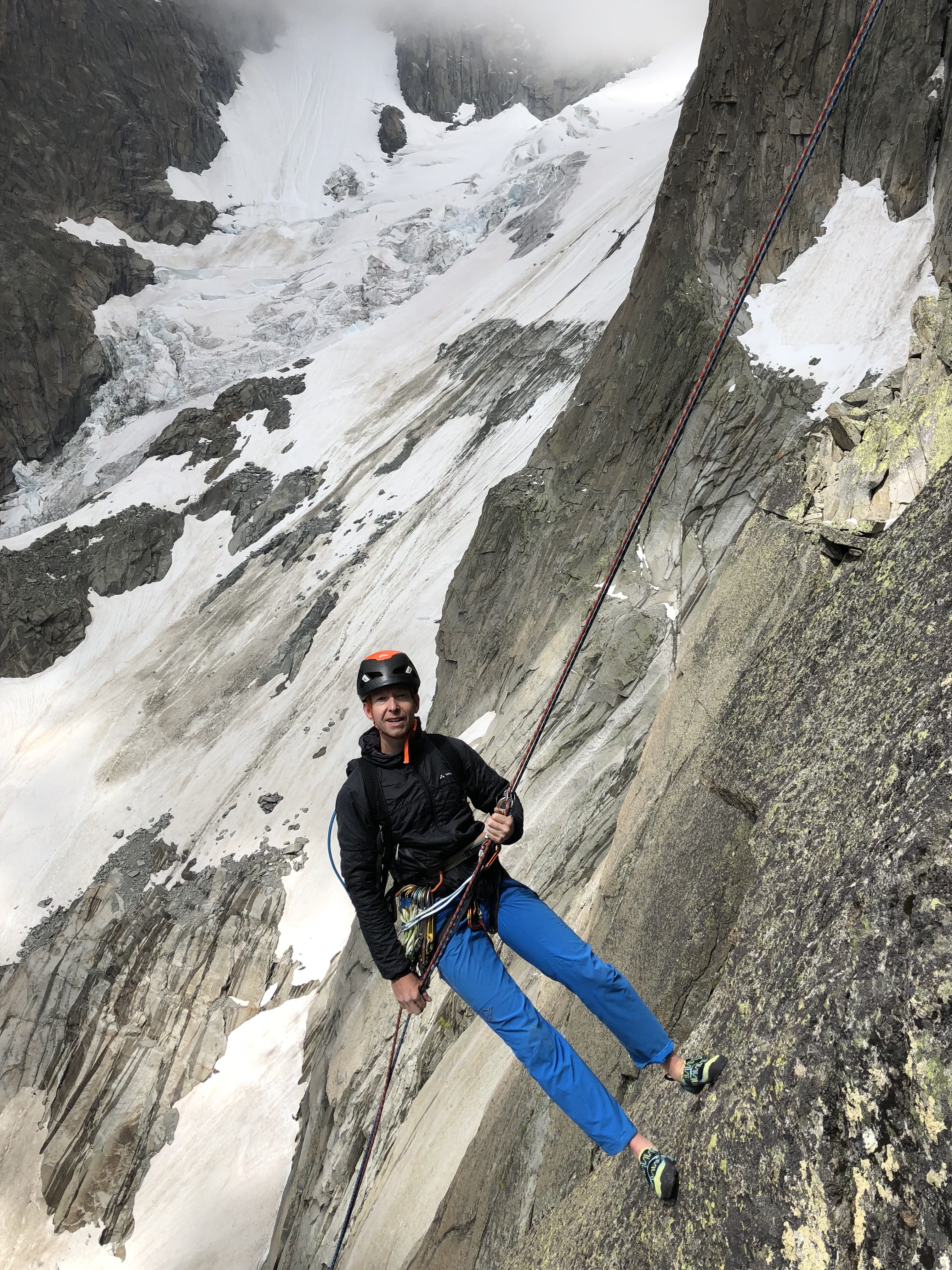 Harald rapelling. The crevassed glacier on the left has to be navigated the day after, to arrive at the base of the Dru.

After the route, we go to look for the glacier that has to be dealt with the next day. On crampons and roped in we start the traverse, but the small track and what we can see feels okay and we decide to head back to the refuge to rest and prepare us for the next day. 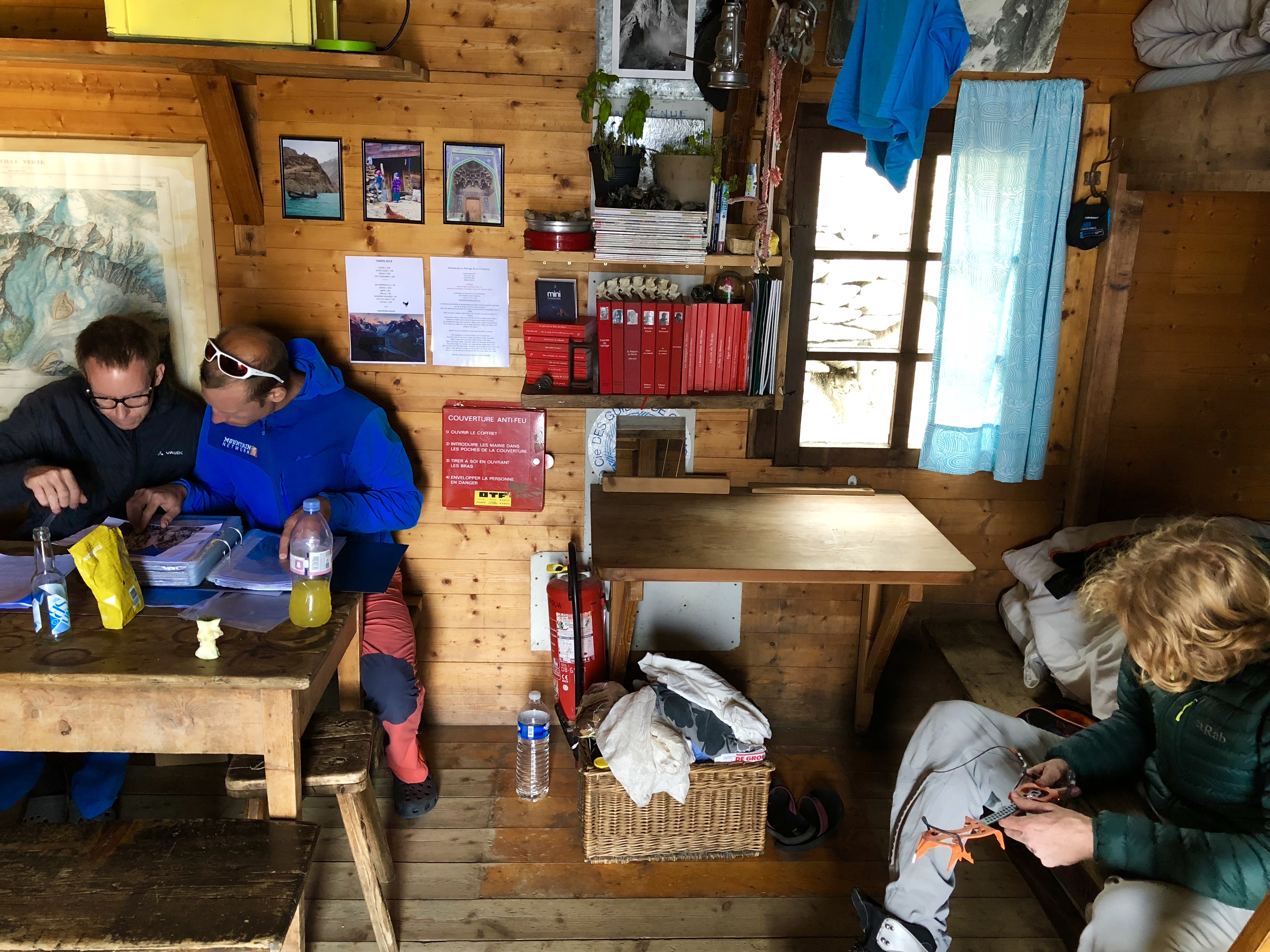 Contamine on the Grande Dru

The next day starts at around 3:30AM. Not much sleep, as it is very difficult to sleep when you are with so many. It’s really warm and of course there are some snorers present.. I curse them, I mean, if you know you are a snorer, how selfish is it to sleep in a hut where so many others will have a bad night because of you? Bring a tent..

Anyway, after a short breakfast we get outside. Right after leaving the refuge, we already see around 10 headtorches at the base of the Dru (most of them are going for the traverse of the Dru’s).

Efficiently we traverse the glacier, with some crevase jumping and a little bit of ice scrambling. After the glacier there is a snow/rock ledge to be traversed and some scrambling to reach the start of the first pitch. Because it’s dark, the headtorches above us (there a 2 or 3 other parties before us) are helpful. 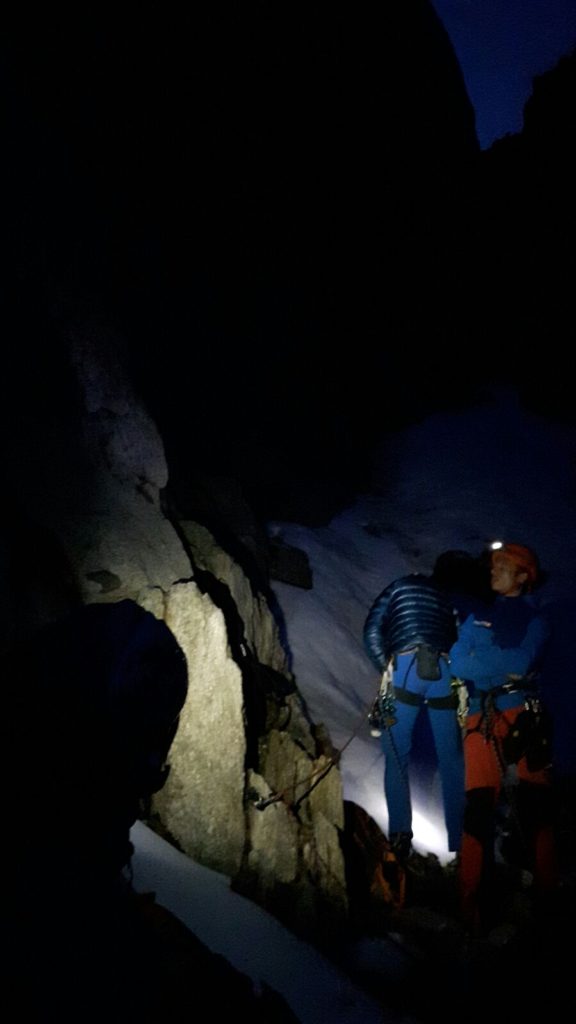 Where the real climbing starts..

The first pitch of the Contamine is not a good warm-up. It’s immediately ”on” with unpleasant off-width like climbing. Combined with a big pack with crampons, axe and water it’s not easy to start with. Big thanks to Harald, who leads this pitch in the dark and brings up our rope in order to save us some juice. 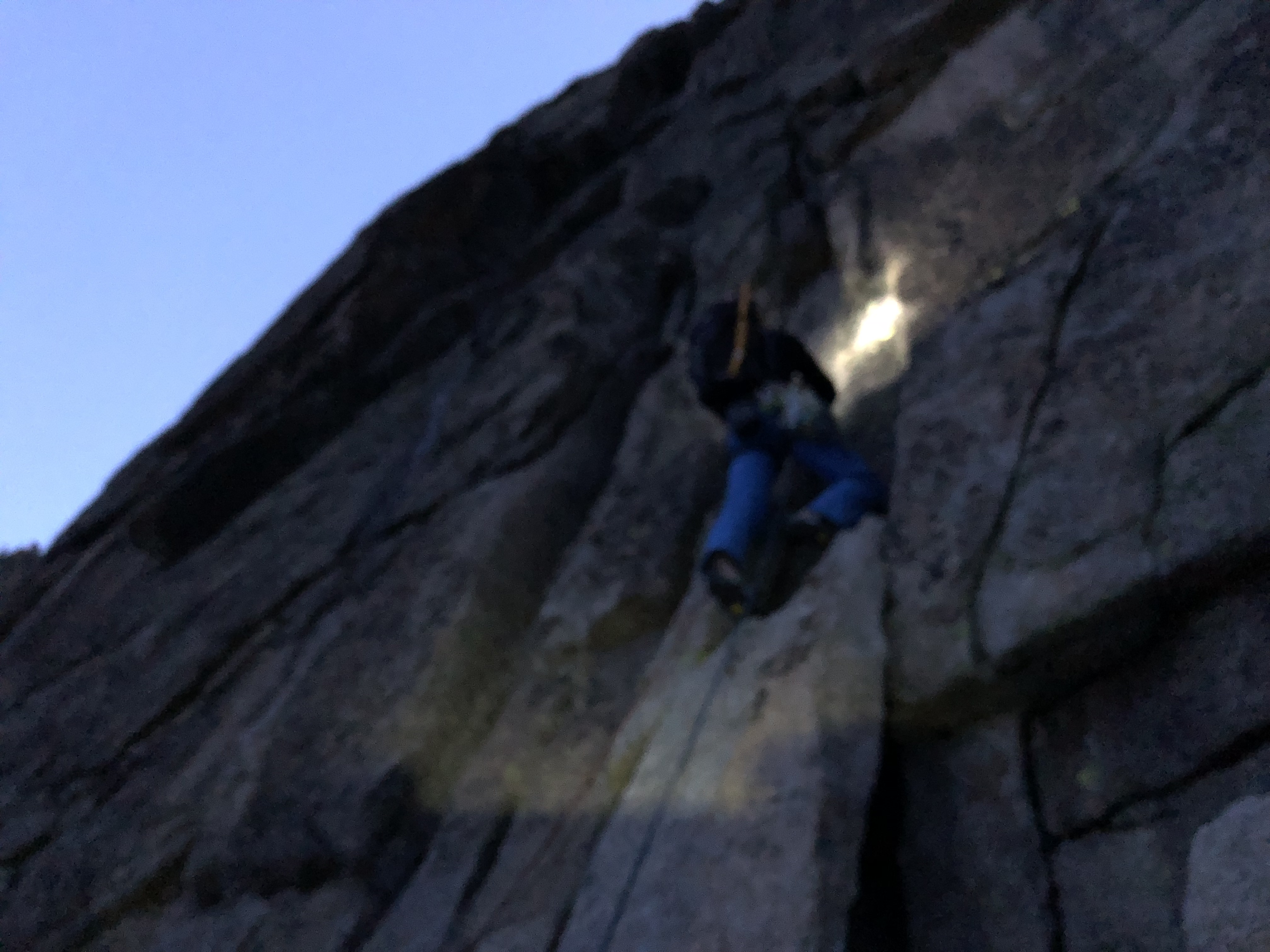 Harald at the start of the 1st pitch

After this, things are getting a bit easier and we try to keep up with Harald & Jelle. This is difficult, as they are a strong and fast team. Harald is a skilled climber and routefinder, and Jelle moves quickly in this type of terrain with his long track record and all the meters he covers with his work as a mountainguide.

The topo we have is the one below (not too helpfull, actually ;)). Combined with the fact that there is almost no fixed gear or pegs, (around 20-25 pittons to be found in the whole route – belays included) and the rock is not worn at all, it makes routefinding surely more difficult than on the granite classics elsewhere. 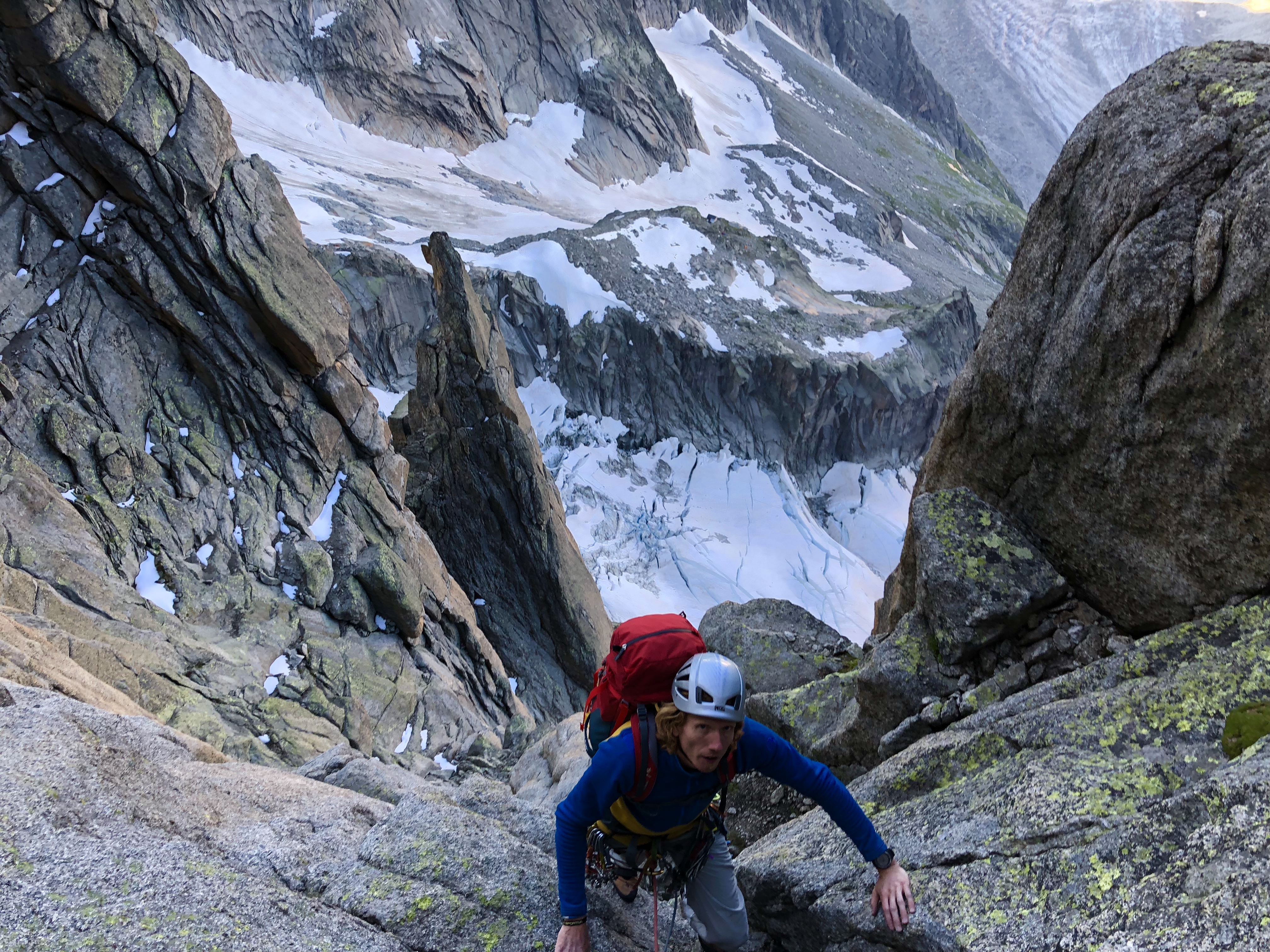 Laurens on the easier pitches of the 1st pillar. 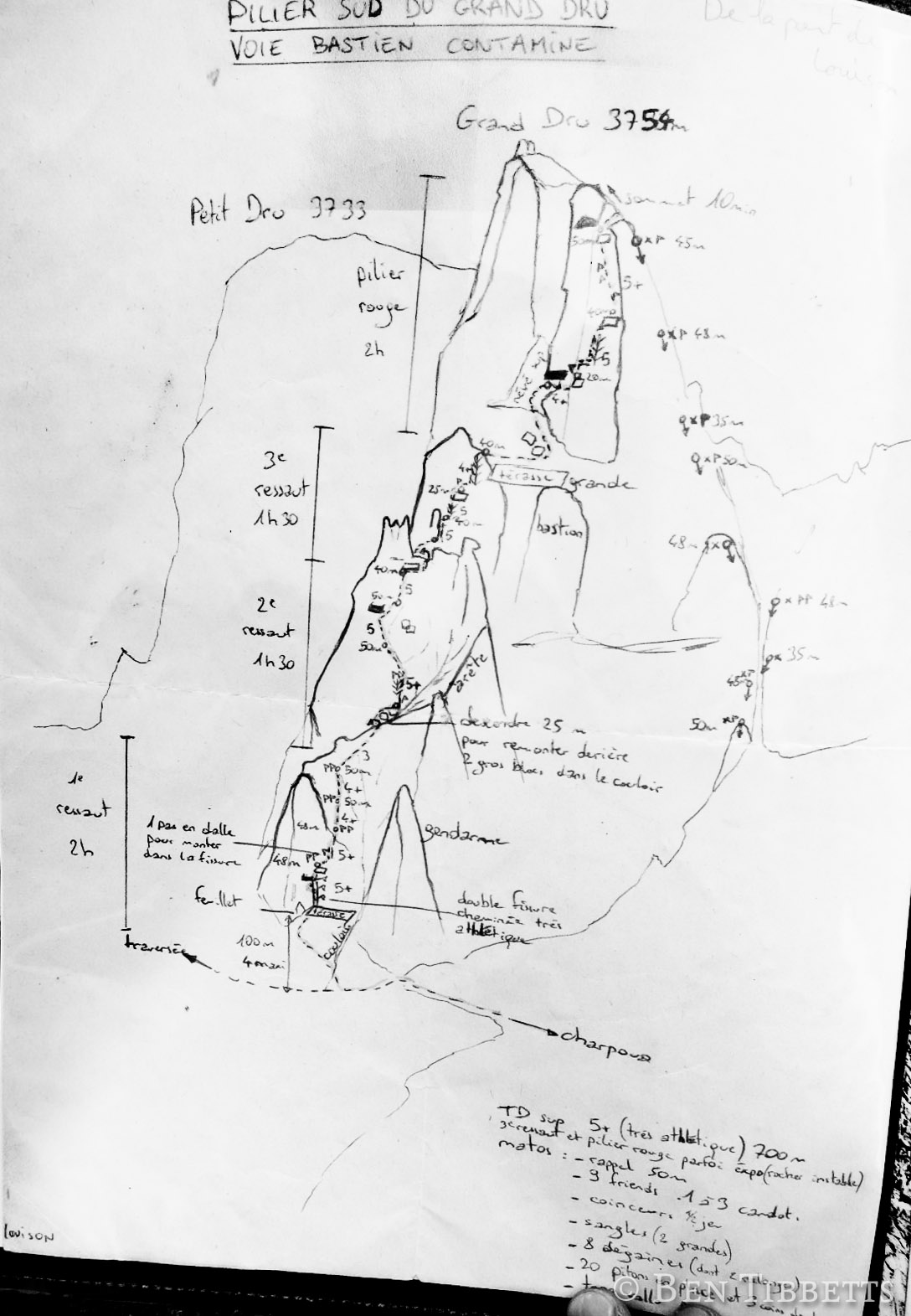 Topo says: find it out yourself 😉

The Contamine route is a TD+, 700m, 6b, and consists of 4 towers to be dealt with. 5+ in the topo, 6b on the internet, but even for 6b it’s pretty hard I would say. But this how things were graded back in the days.. 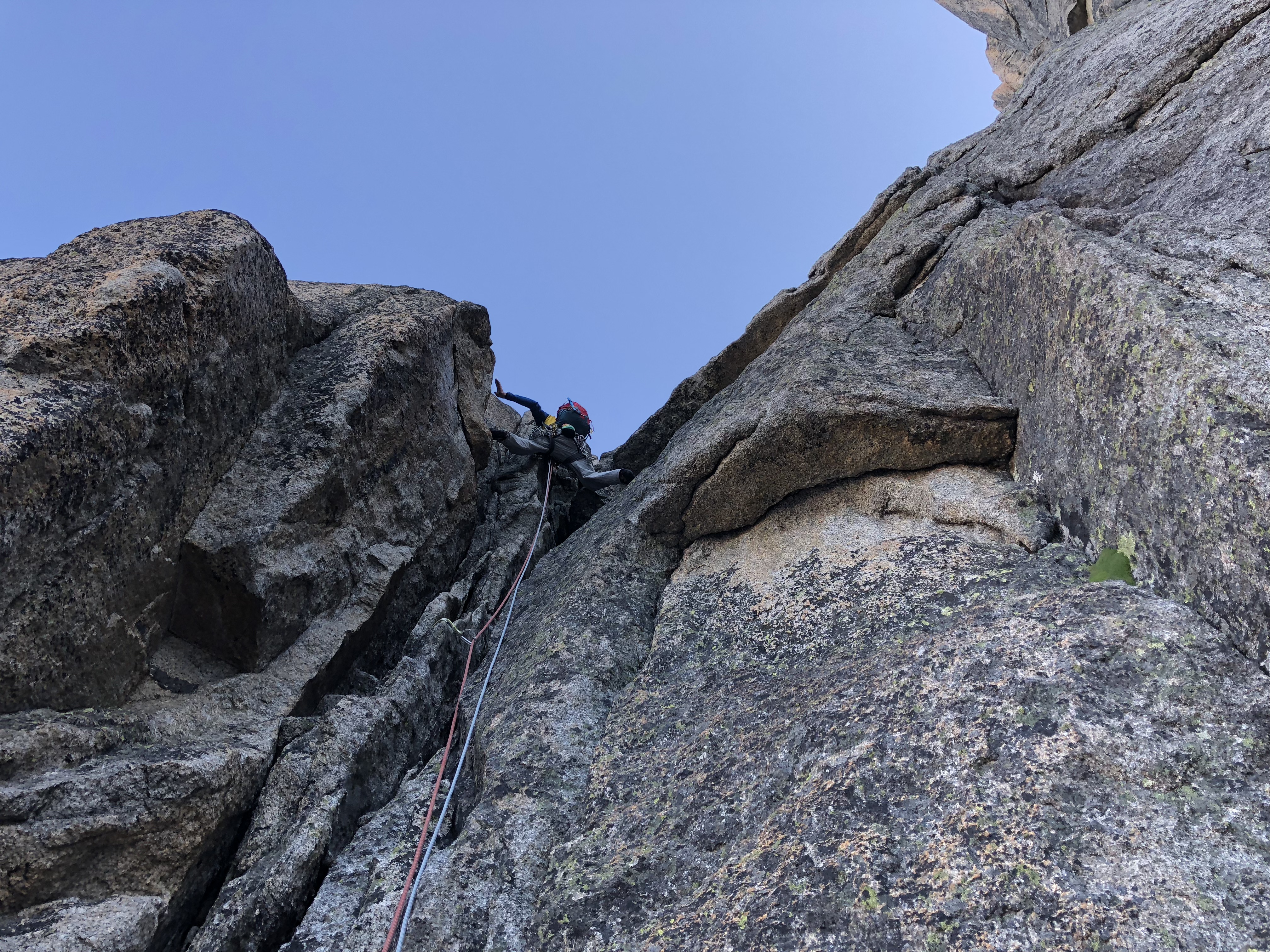 Laurens leading a pitch somewhere lower in the route 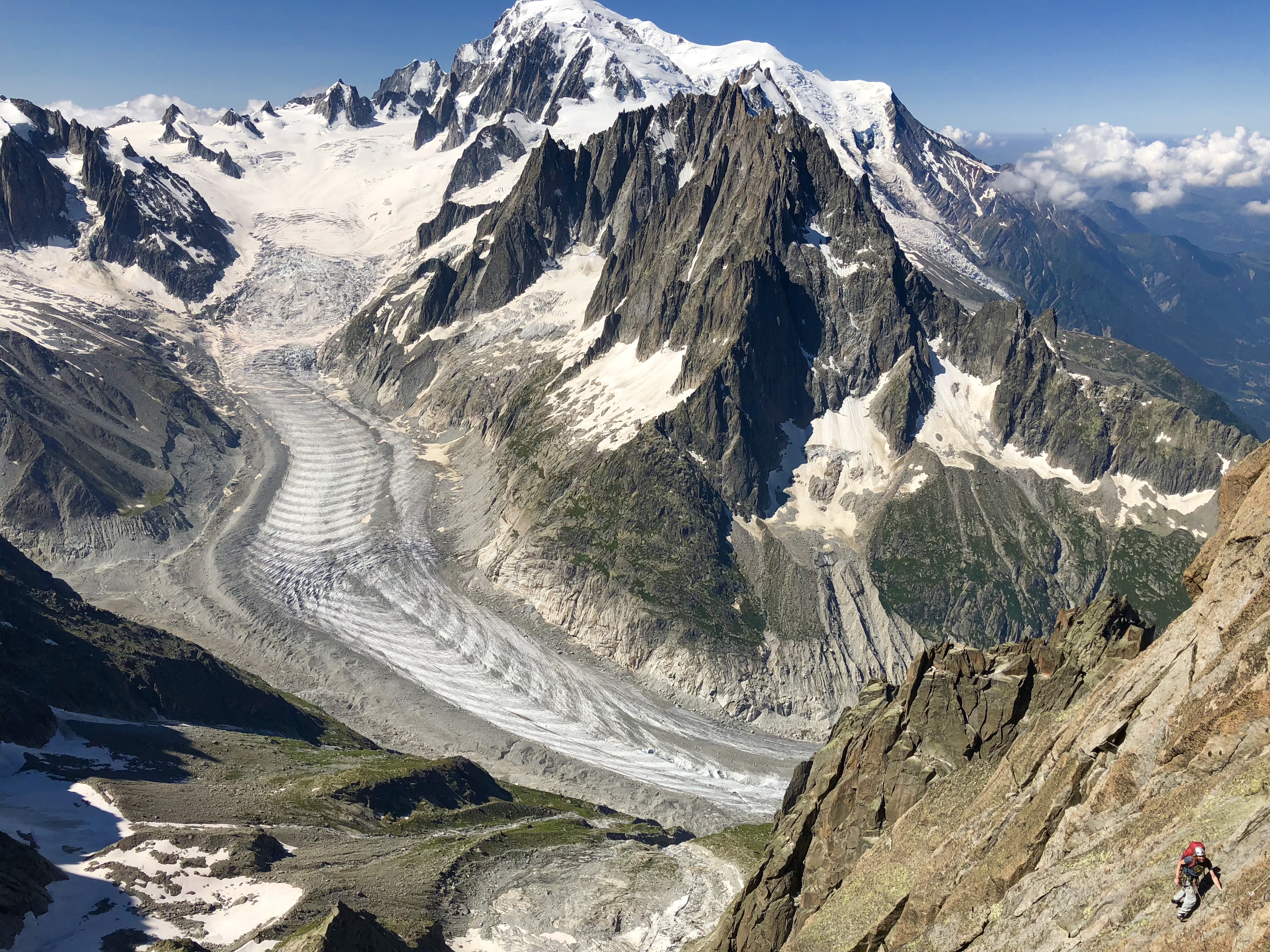 Views towards the Envers and Mont Blanc 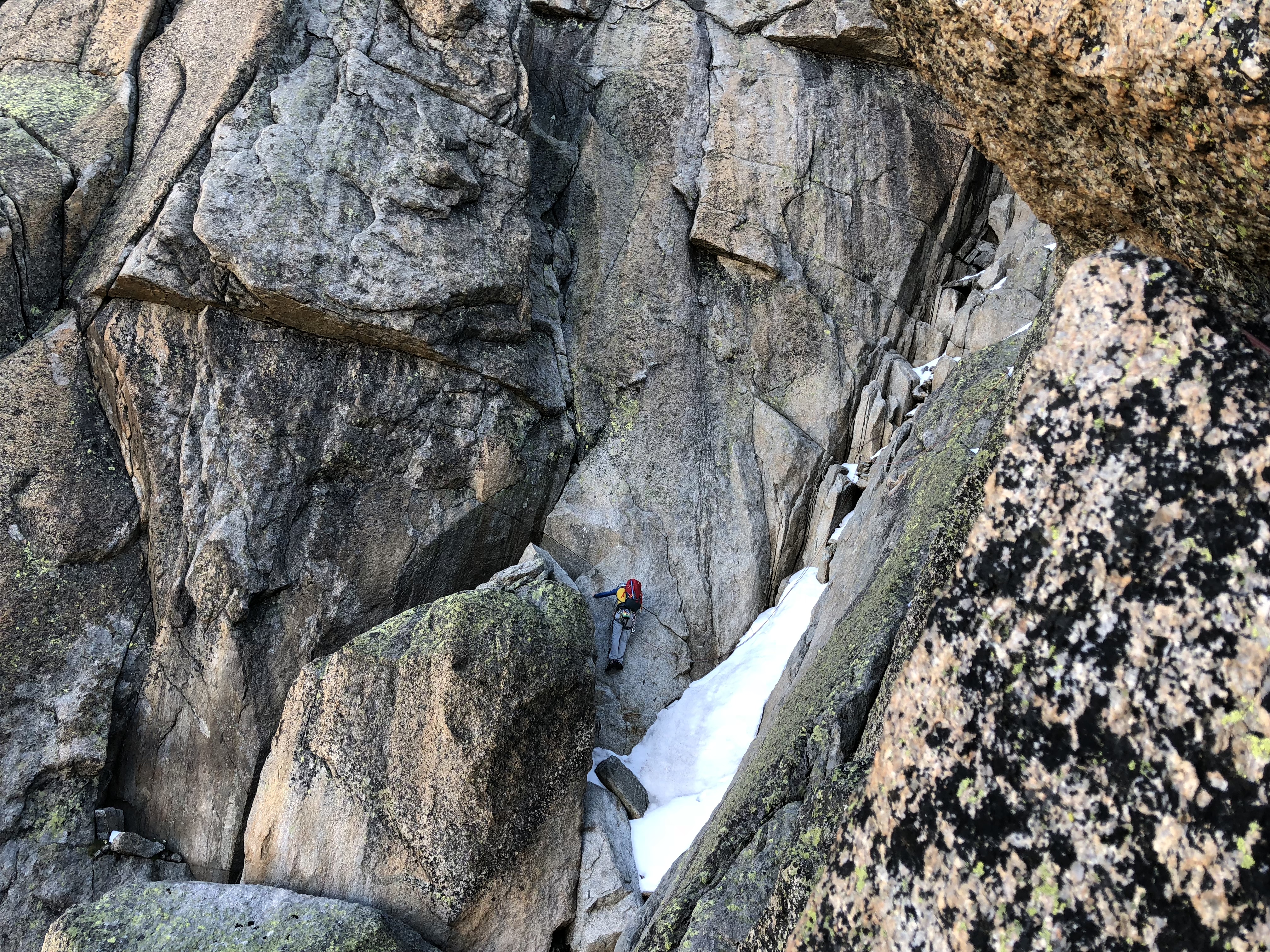 Crossing the snowcouloir after the 1st tower

In the middle of the day clouds and mist roll in. The impact on the atmosphere on a mountain when this happens: suddenly you realize again that you’re in a high alpine place, where weather and temperatures can change in a split second.. 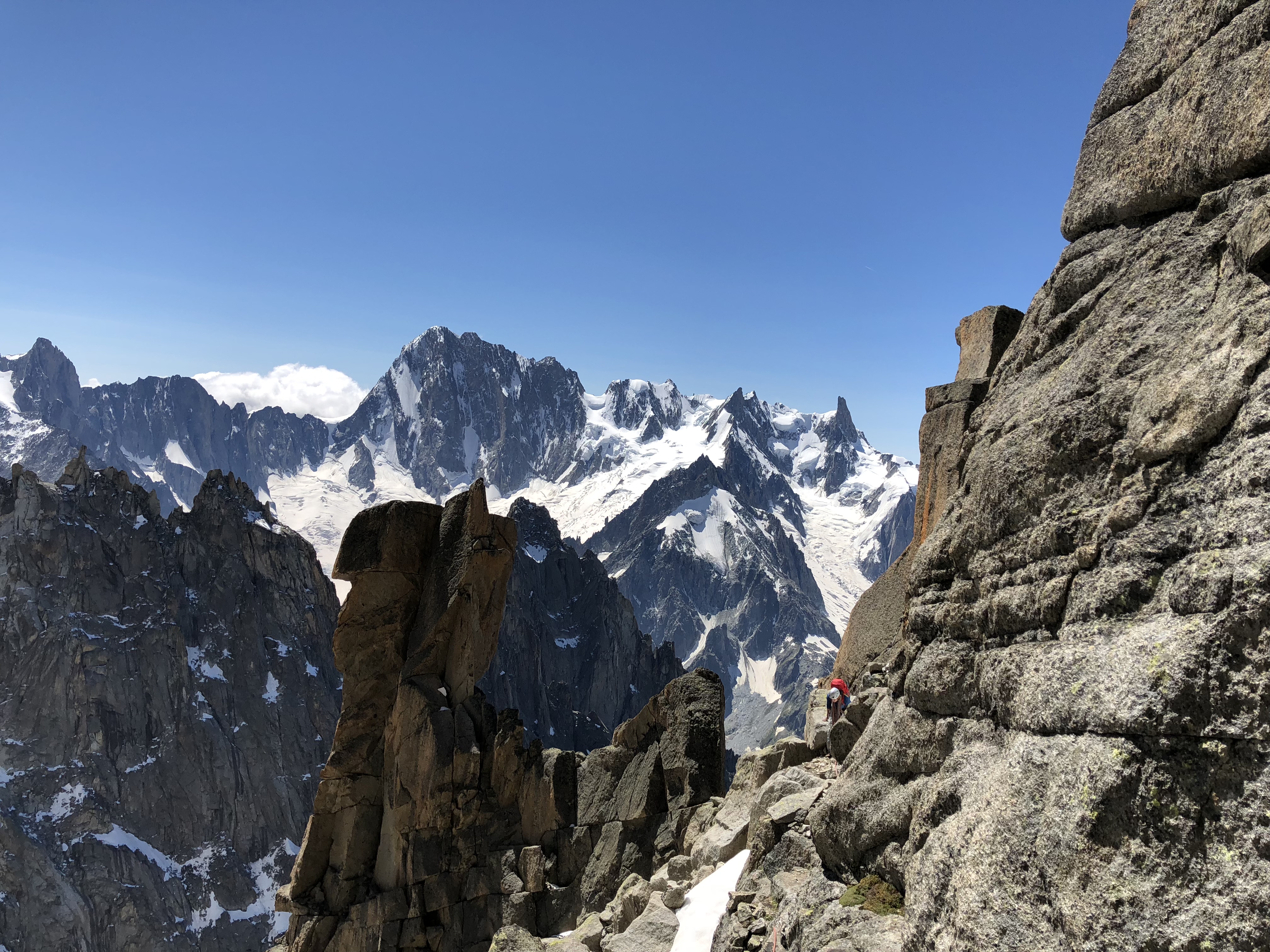 After crossing the fenêtre after the 2nd towerI remember that the second half of the 2nd tower is not too easy, slabby terrain, good footwork is necessary and we haven’t seen any pegs here. Maybe we complety lost the line here. After the relief of crossing the small window (‘fenêtre’) at the end of the 2nd tower (one of the only striking things to be found on the topo), some easy terrain follows.

After the 2nd tower Jelle & Harald are out of sight. It doesn’t feel that Laurens and myself are moving very slow, but in retrorespect I think at least we were slow. This is the 1st time we climb a route like this together and the routefinding makes it intense. Fortunately we are good friends, so we know we can trust eachother.

From the 2nd to the end of the 3rd tower there is some good climbing. A few tricky crack moves included. After the 3rd tower we loose much time because here it is really unclear where to go. Crossing some steep small snowfields and all the clouds makes it difficult to navigate for us. After all we think we found the right way here. 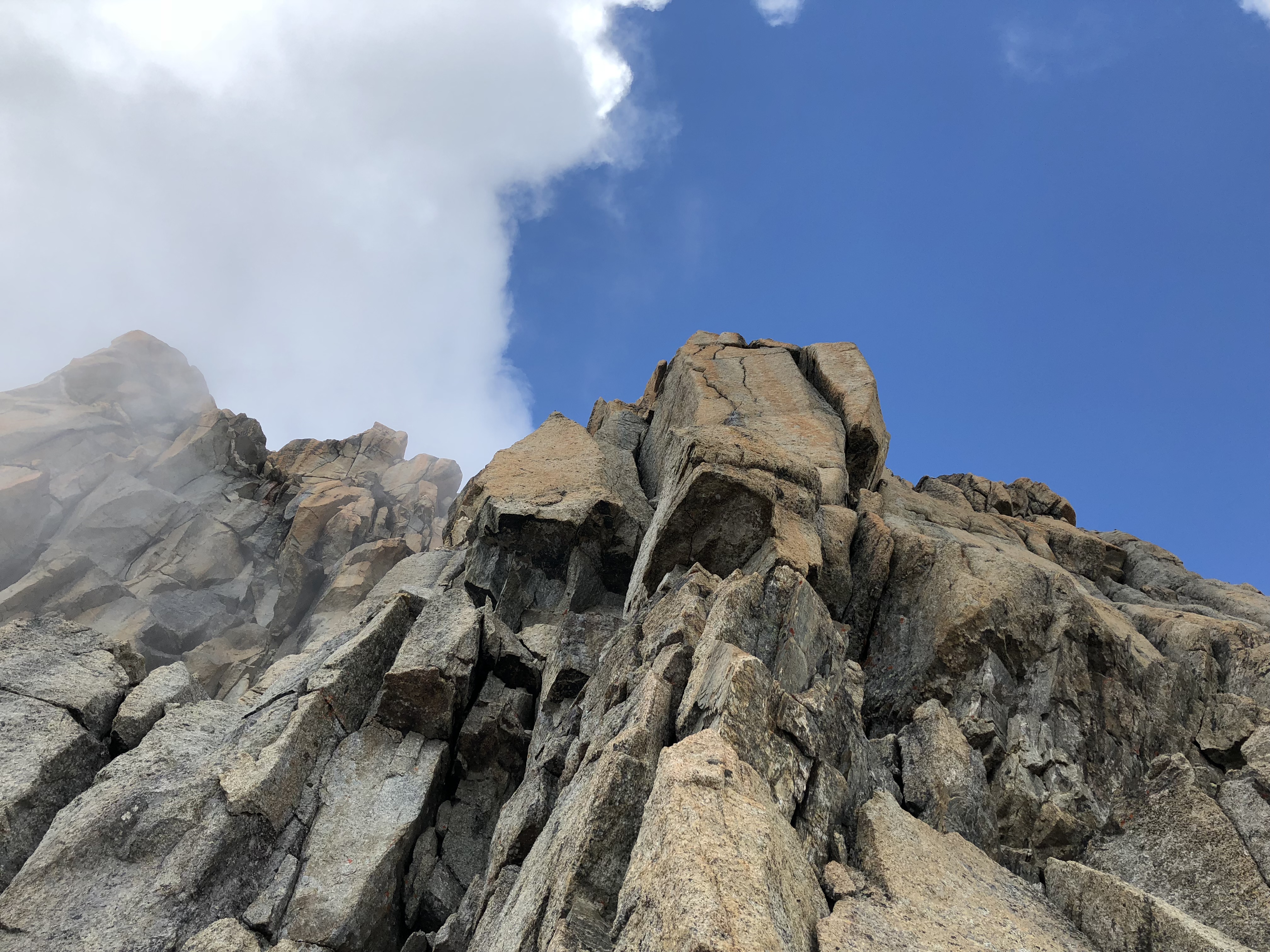 On the 3rd tower

Laurens seconding on the 3rd of 4rd tower

Luckily someweher after climbing out the 60m rope on the 4th tower, I hear voices above me somewhere in the clouds. When I scream Harald and Jelle’s names, I hear it’s them, they have been waiting for us here at the end of the 4rd tower, to abseil down together. We leave the scramble to the main summit for what it is (Harald & Jelle have been there) due to the bad weather, the time (it’s around 5 or 6PM), the fact that they have been waiting for us and that we don’t want to risk a bivy. 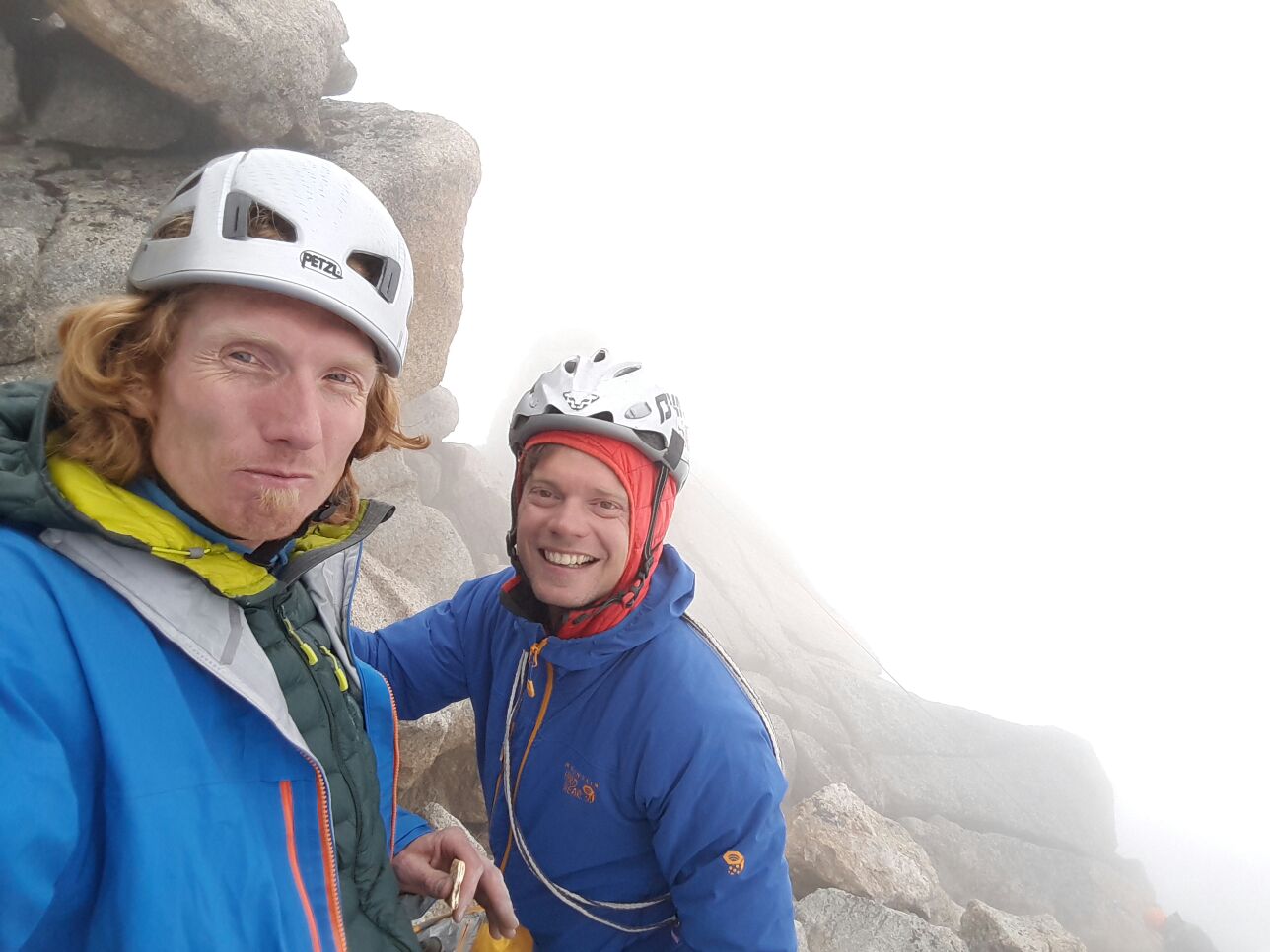 Laurens and me (pretty wasted) 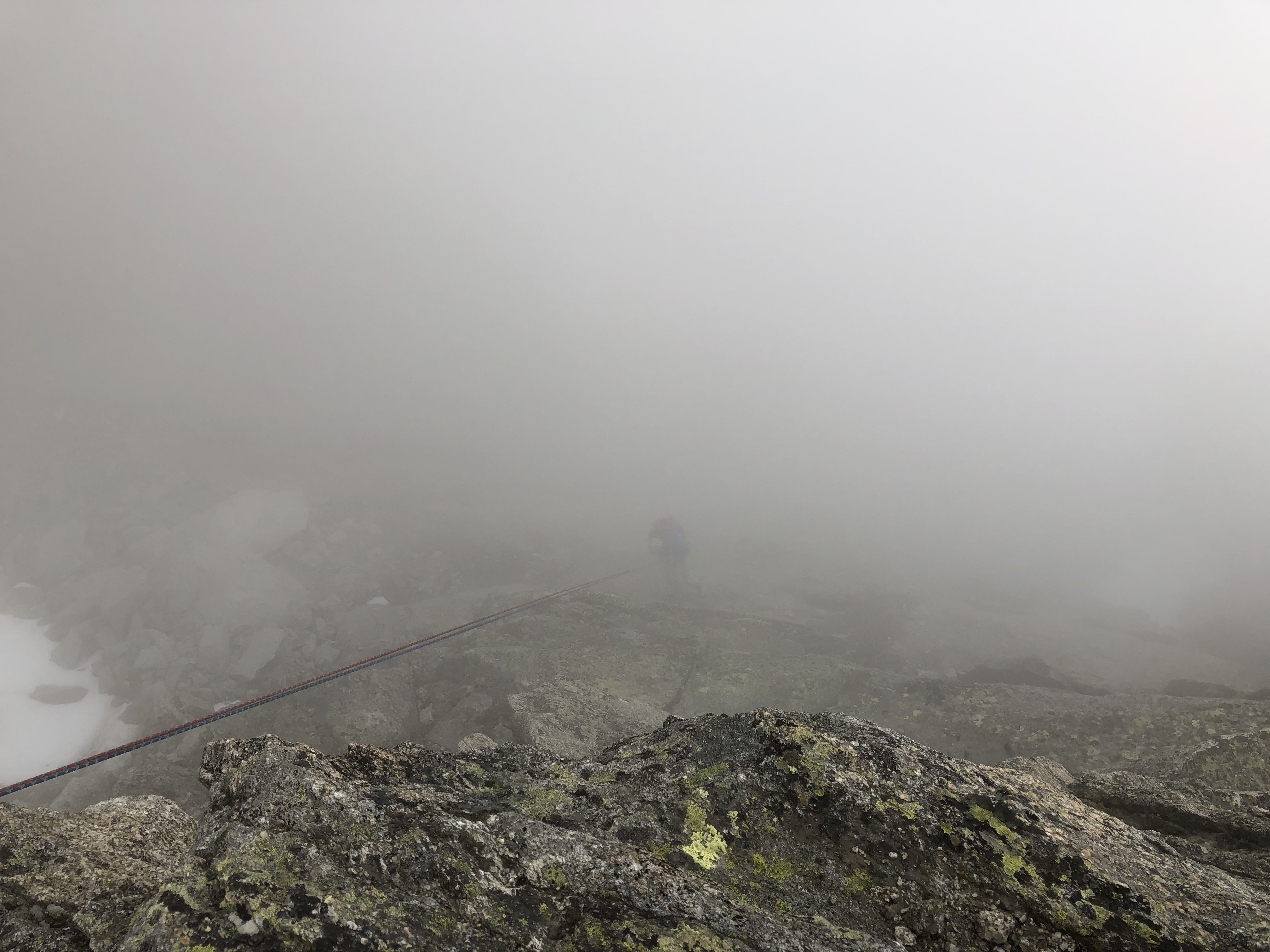 Rappeling into the unknown

A separate topo has been drawn for the 600m of rappels. And we understand why while we are descending, the anchors are quite hidden…..a very smart decision of the people who solidified them some years back. So much loose and unstable rock here. The anchors are relatively sheltered and have one drilled bolt each.  After a long serie of rappels we stand on the glacier and rope in for the last 45mins of our long day. Fortunately we reach the end of the glacier safe & sound, in a very good mood. 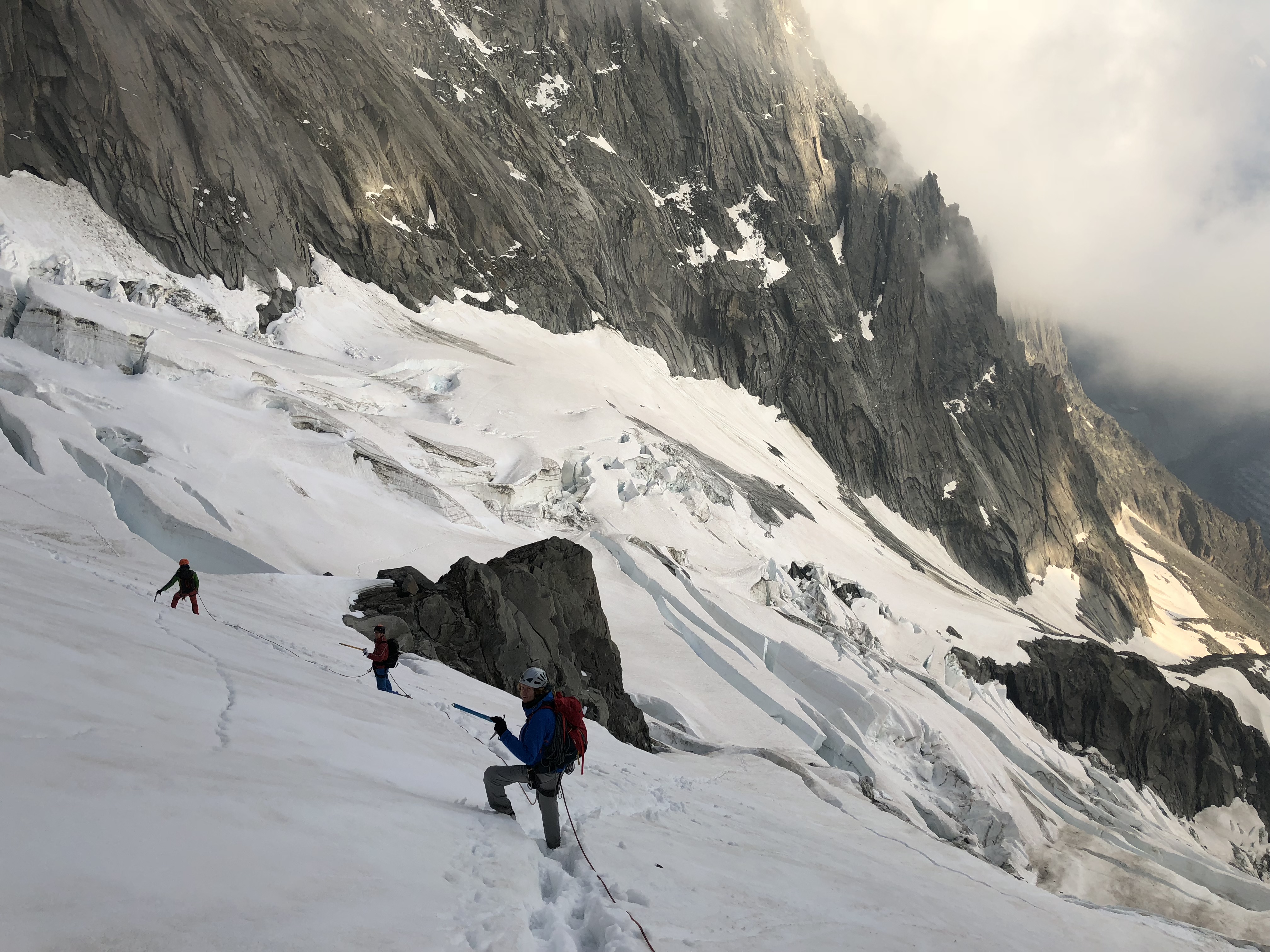 Back at the glacier 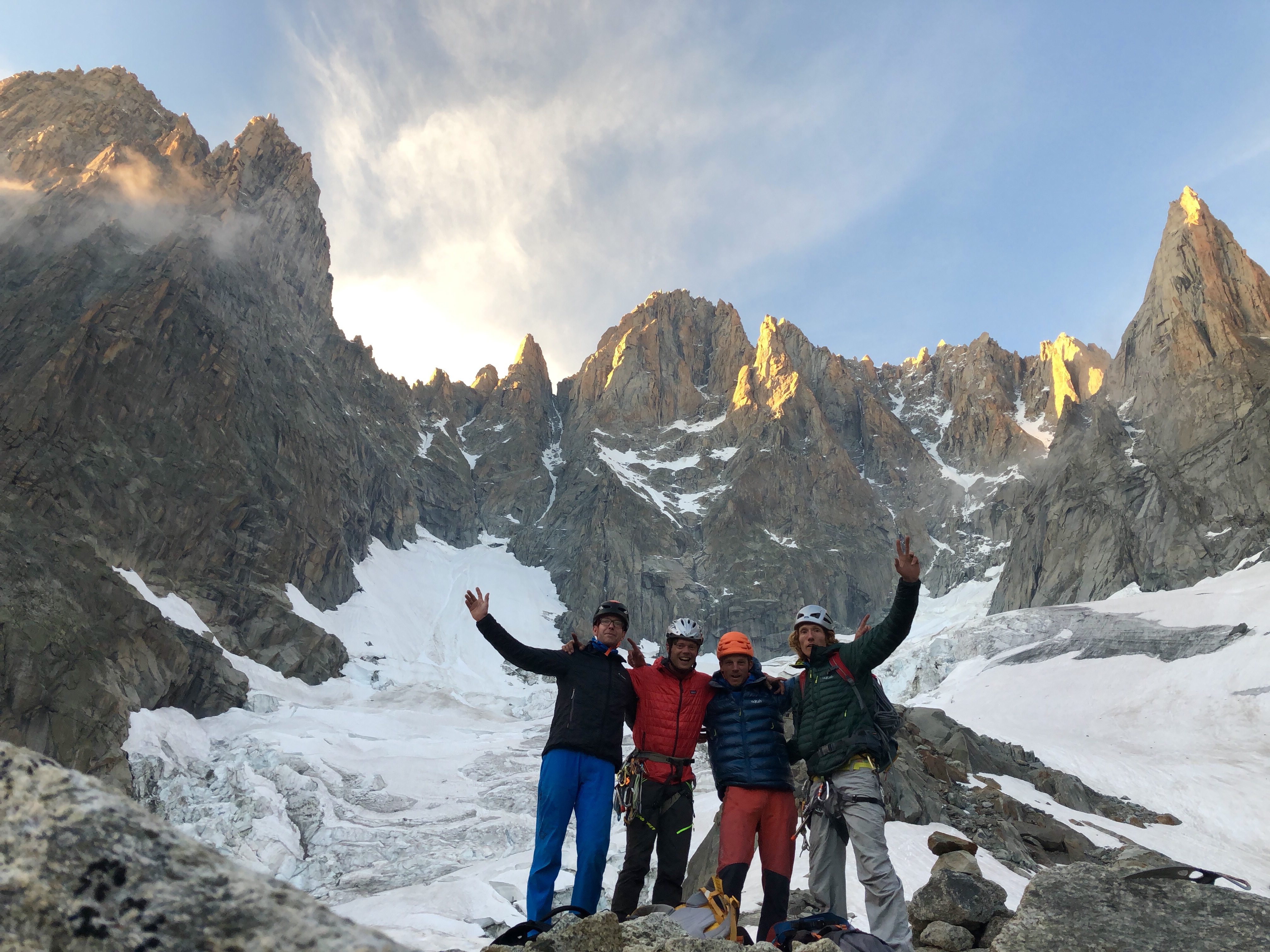 Almost back at the hut!

Thanks guys for the perfect time together!

I have thought back about these days much. When I was preparing for a summer of alpine climbing, bad luck streak and I got seriously injured when a scooter knocked me over while biking. This happened a day before leaving to the Alps, at the start of August, so sadly the Dru was my only alpine climbing trip in 2018. Fortunalety I completely recovered, did a lot of hard sportsclimbing and some skiing, but hopefully I will be back on Chamonix granite soon.